‘A Republic, if you can keep it’: Assembly panels advance discourse on civilian-military relations, future challenges 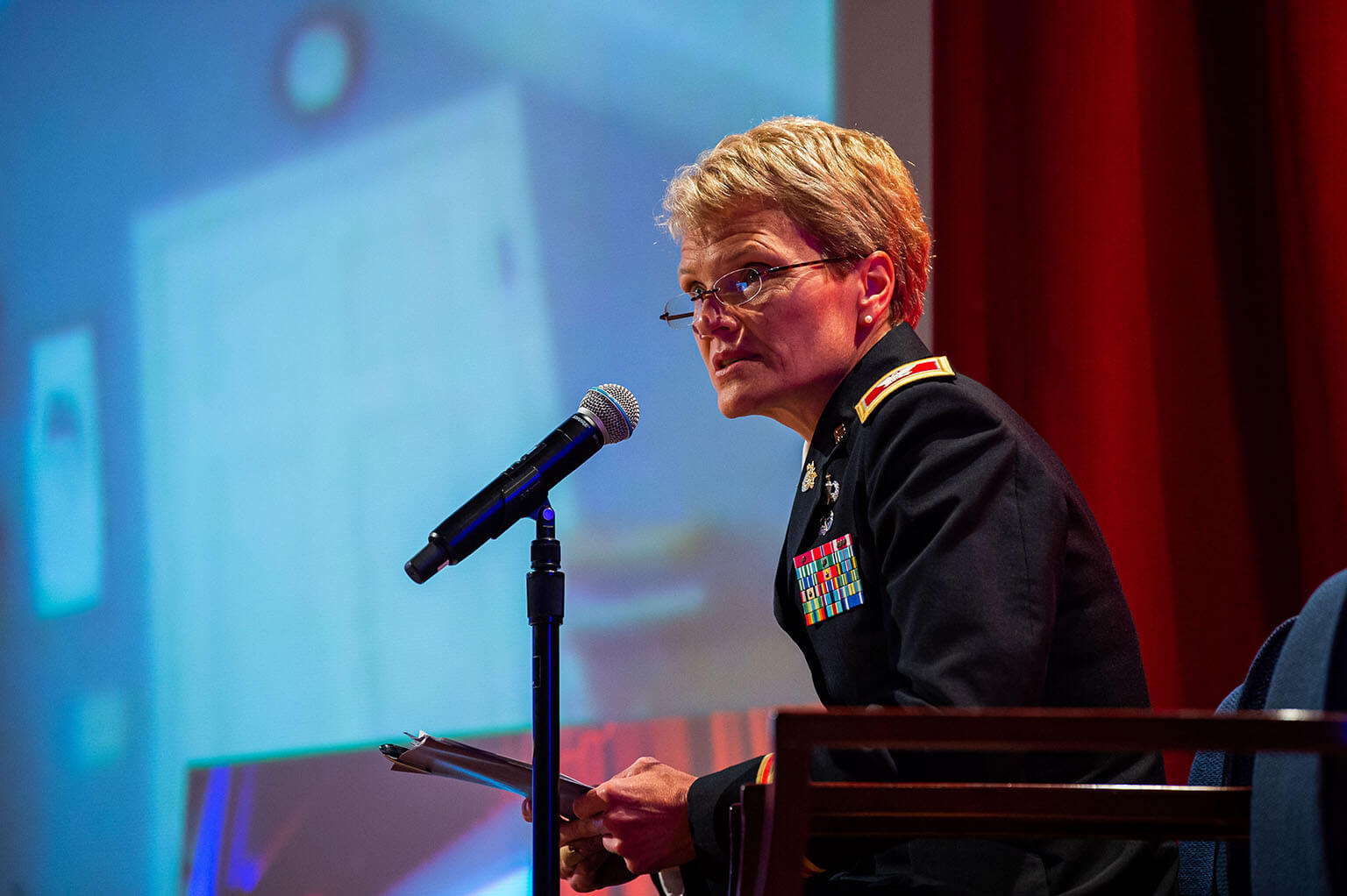 Colonel Suzanne Nielsen, a political science professor at West Point, speaks at a panel discussion during the U.S. Air Force Academy’s Assembly, Oct. 13, 2021. The topic of the discussion was “The Profession of Arms and the Preservation of Democratic Norms.”

The sociopolitical fallout from a global pandemic and the increasing polarization of American culture underpinned the expert panel discussions at the Air Force Academy’s 63rd annual Assembly. The cadet-planned assembly, held 12-14 October, commenced with the theme “The City on the Hill,” bringing to light the contemporary challenges of democracy at home and abroad.

The first panel discussed the subtle complexities of contemporary civil military relations, often described as a complex and critical relationship in the continued advancement of American democracy. The January 6 insurrection on the Capitol, of which one in five participants were veterans, sent shockwaves throughout American society, necessitating a careful reexamination of the word ‘profession’ in the profession of arms.

A Broader Meaning of Professionalism

Several critical takeaways emerged from the first expert panel discussion, entitled The Profession of Arms and the Preservation of Democratic Norms. Dr. Risa Brooks of Marquette University and adjunct scholar at West Point’s Modern Warfare Institute, emphasized the implicit concepts underlying professionalism in the military. According to Brooks, obligation to American society, a commitment to non-partisan ethics, to critical thinking and self reflection, and lastly a deeply internalized understanding of the military oath are key pillars to professionalism within the ranks.

Challenges for Military Education and the Officer Corps

According to panelist COL Suzanne Nielsen, intelligence officer by trade and professor of political science at West Point, to perform such a necessary but nuanced role requires a “meaningful integration of the military with the liberal values of society.” She asserted that a professional military education that teaches officers political awareness and the operationalization of strategic advisory roles can only bolster non-partisanship.

The challenge then, according to Dr Carrie Lee of the US Army War College, is not to give in, to become embroiled in the chaos of culture wars and a polarized political environment. “There is responsibility in the officer corps to make sure we are responsive to and responsible for ensuring that American society can place trust and faith in this group.” Retired Major General Randy Jayne, who served on the National Security Council under both the Ford and Carter administrations, would reiterate that a politically charged world is unavoidable. “How and where we respond and behave is very crucial,” said General Jayne. “We need to be ready to play and to do so professionally.”

In the final panel, guest lecturers Dr James L. Wilson and Eric Liu dove into passionate discourse on the Citizen’s Role in Maintaining a Democracy. Wilson, an assistant professor at the University of Chicago, posed the notion that all American citizens are equal political contributors, with democracy being the vehicle for establishing the shared relationship of decision making authority. He suggested that what is paramount in maintaining democracy, is holding on to its values and convictions under a wide range of circumstances and particularly in the most trying of circumstances.

Both Liu and Wilson share the view that democratic values should be manifested in our ordinary relationship and everyday lives. Liu, CEO of Citizen University, asserted that a culture of powerful, responsible citizenship will cultivate the kind of citizenship to propel democracy forward. Merging power and character, said Liu, is key to this kind of citizenship, and character itself must be actively cultivated. “When detached from an ethical core,” he said, “all you have is a finely honed sociopath.”

Cadet 1st Class Briana Barnett, 63rd Academy Assembly cadet director, stated that it was critical that “officers are able and willing to gather information from both sides of controversial topics because they are leading people who lie on both sides.” To be both an effective officer and citizen requires a synonymous dedication to ethics and a commitment to stewardship. “A professional officer,” said Cadet Barnett, “is able to educate his or herself on the topic but not let their opinions impede their ability to be unbiased when leading their men.” 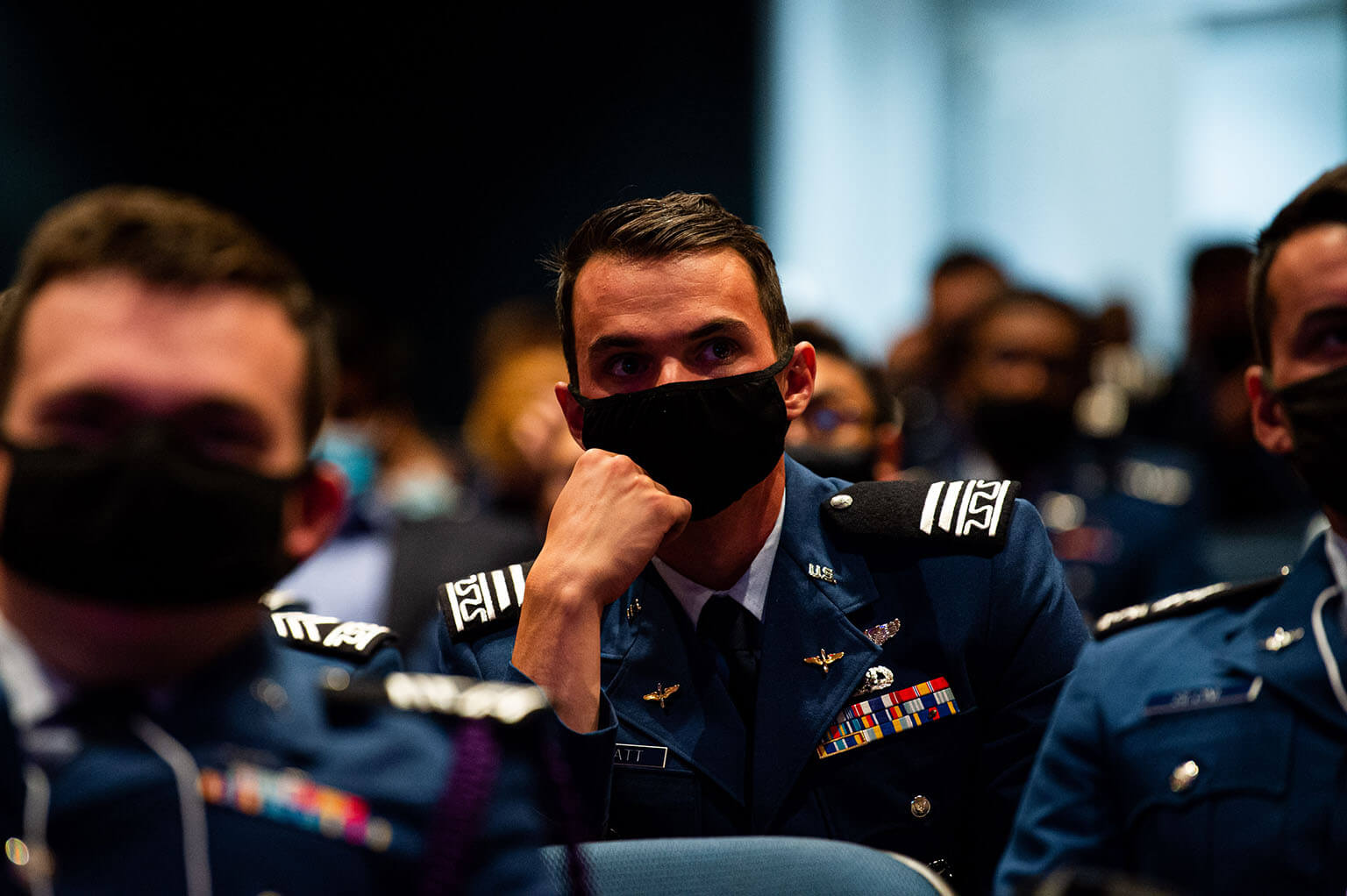