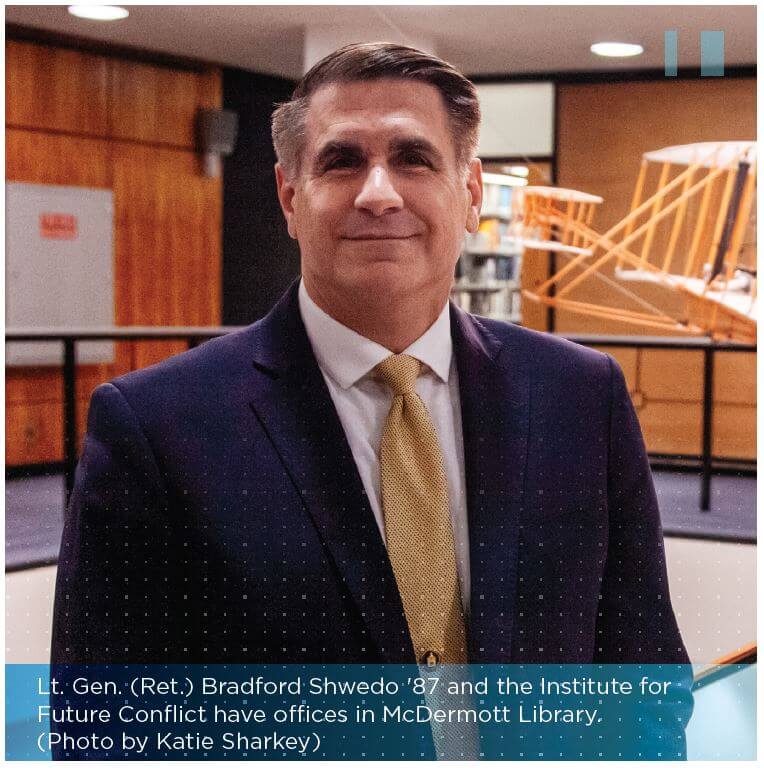 One of the Academy’s newest initiatives all started with Dr. Paul Kaminski’s “Big Idea.”

In 2016, Kaminski ’64 — a stealth technology pioneer — authored a white paper and approached Academy leadership with a challenging question: How do we better prepare cadets for warfare of the future?

Over the course of multiple conversations, brainstorming sessions, and presentations, the Institute for Future Conflict (IFC) was born.

Thanks to the ongoing financial support of donors, the institute was officially established on Nov. 8, 2019. Then, in March of 2021, Lt. Gen. (Ret.) Bradford Shwedo ’87 was named its first director.

Shwedo comes to the role following an active-duty career chock-full of assignments in the cyber, space, intelligence and information technology realms. His most recent assignment was as the chief information officer and Joint Staff director for command, control, communications and computers/cyber.

During his initial months as IFC director, Shwedo has been working closely with Air Force leaders to ensure the institute achieves its mission of anticipating future needs and readying cadets for the new approaches to conflict.

Kaminski frequently uses the analogy of hockey great Wayne Gretzky in explaining the need for the IFC. What made Gretzky great, the Hall of Famer is quoted as saying, was the player never skated to where the puck was but to where he anticipated the puck would be.

That’s the mindset our nation needs to adopt, Kaminski says, as our military tries to stay one step ahead of our adversaries.

Desert Storm proved to be a significant emotional event for many rivals to the United States, according to Shwedo.

The military’s rapid takedown of Iraq was an eye-opener for such adversaries as China and Russia and caused those countries and others to reevaluate future conflict.

“They started taking copious notes on everything we did,” he says. “They realized that Iraq is similarly organized, trained and equipped as they are, and it wasn’t hard for them to superimpose a similar fate on them.”

As a consequence, competitors initiated a dual-pronged strategy. Initially they began examining alternatives to toe-to-toe warfare that would offer a greater chance of success.

“They started looking for asymmetrical attack accesses,” Shwedo reports. “And they feel like they have found some.”

Among the obvious vulnerabilities identified were cyber, space and artificial intelligence.

“They also started making investments on being able to take us on toe-to-toe conventionally,” he adds. “Those investments started 30 years ago, and now they’re starting to come to fruition.”

Unfortunately, the terror attacks on Sept. 11, 2001, took our collective attention away from the Great Power adversaries and their advancing capabilities, according to Shwedo. The nation instead poured significant resources into battling the Global War on Terrorism (GWOT) while our adversaries stayed padlocked on the United States.

“We were going down the road of Great Power Competition,” he recalls. “Then, all of a sudden, we got hijacked and started focusing on Al-Qaeda, the Taliban and later ISIS. In the battle for finite resources, as we started to reduce our counterterror-ism efforts, we found our previous investments and focus left us ill-equipped for Great Power competition.”

Because global terror organizations didn’t have effective abilities in electronic warfare and space, the military budget reflected a higher priority on lower-technology adversaries.

As the Global War on Terrorism has dragged on, the focus on extremists allowed our Great Power adversaries to make gains in their competition with the United States, and both symmetrical and asymmetrical attack accesses grew more pronounced with every budget cycle.

In the infosphere, both China and Russia along with other state actors have made inroads in cyber and space warfare. The recent Colonial Pipeline hack — which took down a critical gasoline and jet fuel delivery system — is just one example of the growing threat from overseas. The ongoing intellectual property theft by China is an-other huge threat to the nation’s economy and security.

Additionally, the Chinese military has successfully encroached upon the South China Sea by creating artificial islands. Plus, the Russians have flexed their military might on the Crimean Peninsula.

“They’re making great gains by keeping it below the level of armed conflict,” Shwedo says. “And they feel like they’re doing OK.”

As a result of the gains made by our adversaries, it’s obvious we can no longer allow this competition to continue unopposed, he reports.

Under the new National Defense Strategy, our military’s focus is again Great Power competition and “getting our forces correctly organized, trained and equipped,” Shwedo says.

The new IFC is perfectly positioned to prepare future officers for that national security imperative, he notes.

“We have to enter into the fight for day-to-day competition,” he says.

The Academy and its IFC instructors take seriously Chief of Staff of the Air Force Gen. Charles Q. Brown’s challenge to “accelerate change or lose.”

“The chief of staff and the chairman of the Joint Chiefs of Staff are not drama queens,” Shwedo says. “These folks are seeing what others are seeing, and they’re telling us we have to get ready. And hopefully we can keep it at Great Power competition and not conflict.”

To succeed, Shwedo suggests, the military must first avoid operating in isolated silos, which may have been effective in the GWOT but would be devastating in a high-end fight. All available capabilities — air, land, sea, space, cyber — have to work closely together for the best possible outcome.

“We need that synergistic cocktail,” he says. “We have to break down those cylinders and look at all things from a multi-domain perspective.”

As the IFC matures, Academy cadets will be far more than observers. They will be part of the fight.

Shwedo’s clearances were restored in order to be involved in top-secret conversations with the Pentagon. His first calls for direction went to Gen. David Allvin ’86, vice chief of staff of the Air Force; Gen. David Thompson ’85, vice chief of Space Operations; Lt. Gen. Clinton Hinote ’92, deputy chief of staff for Strategy, Integration and Requirements; Lt. Gen. Michael Groen, director of the Joint Artificial Intelligence Center; and others to stay abreast of topics related to the future fight.

To ensure the IFC stays aligned with Department of Defense priorities, Shwedo has been incorporated into regular weekly Pentagon staff meetings.

As the IFC hires post-doctoral fellows in the days ahead, Shwedo says those individuals also will join the high-level conversations to ensure the Academy and the IFC are up to speed on current trends and efforts. Maj. Jamil Brown is the IFC’s first fellow, with three more to follow.

As the IFC’s work progresses, Shwedo hopes to include cadets in the actual work of counteracting the activities of our adversaries. The cadets will have to secure the necessary clearances to be involved in some of these projects, but that extra effort will pay huge dividends for the country.

“Once they get those clearances, I can unleash them on some of these sensitive projects,” he says. “There’s a lot of untapped potential here. These cadets are smart, and I want to get them in the game. But more importantly, as soon as they graduate, they’ll be able to hit the ground running because they’ve already been involved in all these programs.”

The Academy’s graduate community remains involved in the ongoing development of the IFC. Kaminiski, John Fox ’63, Gen. (Ret.) Gregory “Speedy” Mar-tin ’70 and others are currently reviewing the institute’s curriculum and suggesting changes and additions.

As chair of Airpower Innovation and Integration in USAFA’s Department of Military and Strategic Studies, Col. Beth Makros ’98 has been invaluable in moving the concept forward as well. She will soon become the IFC Council president.

The IFC continues to work with Academy faculty to help shift the previous focus from the war on terrorism to Great Power competition.

“Every one of these instructors has done amazing work throughout their careers, but their experiences for the past 20 or 30 years in the Global War on Terror are not necessarily the same tools, training and capabilities that are going to be required for future conflict,” Shwedo explains. “Everybody has this realization that we have to shift, but there are few here who have experiences from the last Great Power competition — the Cold War — which increases the sense of urgency for this initiative.”

“The superintendent understands this situation better than anybody, and his support has been amazing,” he says. “Gen. Moga [Brig. Gen. Paul Moga] has been personally involved in many actions associated with the IFC and, most significantly, the dean [Brig. Gen. Linell Letendre] was already moving out on many of these initiatives, which laid an excellent foundation for the IFC.”

The ultimate goal of the IFC is to plant the seed throughout the Cadet Wing that the key to our nation’s future military success lies in joint and synergistic efforts.

“I want to open up the aperture so that throughout their career our graduates are looking at multiple ways to attack a problem that always increases dilemmas for the adversary,” he says, “and convinces them that any conflict with the United States is not in their vested interests.”