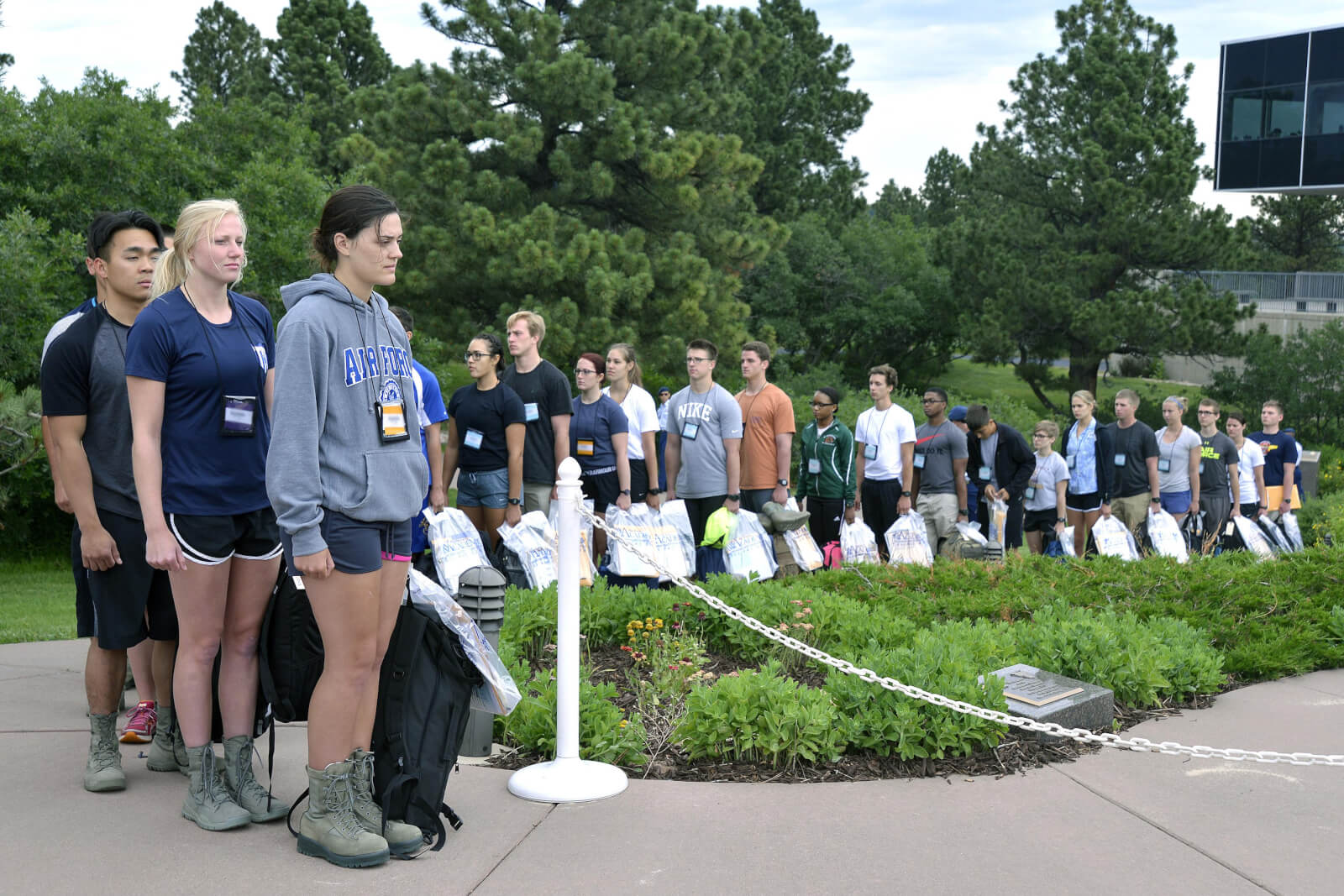 In all, 1,168 appointees to the Air Force Academy were scheduled to begin Basic Cadet Training, a rigorous six-week mental and physical training program designed to introduce them to military life.

Kristen McKenney, 17, is from Orlando, Florida. She stood in the cadet-processing line with her parents, David and Lori McKenney.

“This is kind of surreal,” she said. “It’s weird that it’s finally here.”

Kristen earned an ROTC scholarship but applied to the Academy.

“I just wanted to be here,” she said. “My parents made sure this is what I really wanted to do.”

David is a 1992 Academy graduate. He and wife Lori are both Force veterans.

Lori said Kristen is mentally and physically prepared to be a cadet.

“It’s a tough day, but she’s ready,” she said. “My immediate thought is ‘Oh my gosh. My daughter is going into the military.’ I’m very proud of the effort she took to get here.”

Kristen graduated from West Orange High School. She was recognized for her academic achievements as one of several Super Scholars in Orange County.

Bradlee Ang, 18, is from Chesapeake, Virginia. His father, Lee Ang, is a retired Navy lieutenant commander. He said his dad’s military experience, and a visit to the Academy, reduced his unease about BCT.

“I was pretty nervous but meeting other cadets put me at ease,” he said. “It’s just nice to finally be here. Everything I did in high school paid off.”

Bradlee graduated from Oscar Smith High School. He was class president, and a track and field athlete.

“I want what’s best for him but I’m going to miss the hell out of him,” she said. “Just his presence around the house. [Getting here] is the tip of the iceberg. I look forward to watching him grow into his potential.”

Emily Walbridge, 18, is from Lock Haven, Pennsylvania. What was on her mind as she stood in line with her parents, Jim and Ellen?

“The bus ride, getting yelled at, losing my hat,” she said.

“Emily is strong and determined,” Katelyn said. “Her work ethic will help her greatly during the upcoming year. The best advice I can give her is to stay positive and not give up. Emily can accomplish anything. BCT will not be a problem.”

Emily ranked seventh in her class with a 4.0 GPA and participated in various leadership positions in her student government, including class president, the Rotary Interact Club and the 4-H Club.

Ellen said she is equally proud of her daughters.

“I’m really glad they chose a different route,” she said. “I’m excited for Emily for stepping out of the box.”

Lt. Gen. Michelle Johnson, Academy superintendent; Brig. Gen. Andrew Armacost, dean of the faculty; and Brig. Gen. Stephen Williams, commandant of cadets, spoke to groups of trainees before they were taken to the cadet area via bus.

“Respect everyone and the talents they bring,” Johnson said. “Here, you will elevate our performance by respecting the boundaries and humanity of all around you. You are becoming part of the profession of arms. You’re part of a great, elite team starting today.”

Brig. Gen. Armacost said Academy life will be challenging but worth the trainees’ hard work.

“It will be a challenging and rich experience as you prepare to lead our Air Force and become leaders of character for our nation,” he said. “You’ve done great things to get here — as students, as leaders, as athletes, and as members of your communities.  You’ve proven yourself over and over again, and we’re thrilled you’re here. Congratulations — it’s a huge day for you. We’re honored to have you here as part of the Long Blue Line.”

Williams praised the personal tenacity that brought the trainees to the Academy.

“First and foremost, every one of these appointees overcame huge challenges, the first of many was to get here,” he said.  “The same resolve, grit and dedication it took them to get here will benefit them through their cadet careers; help them as they transfer from civilian appointees to Academy cadets and eventually, Air Force officers. I’ll be thrilled to watch them transfer from civilian appointees into the profession of arms.”