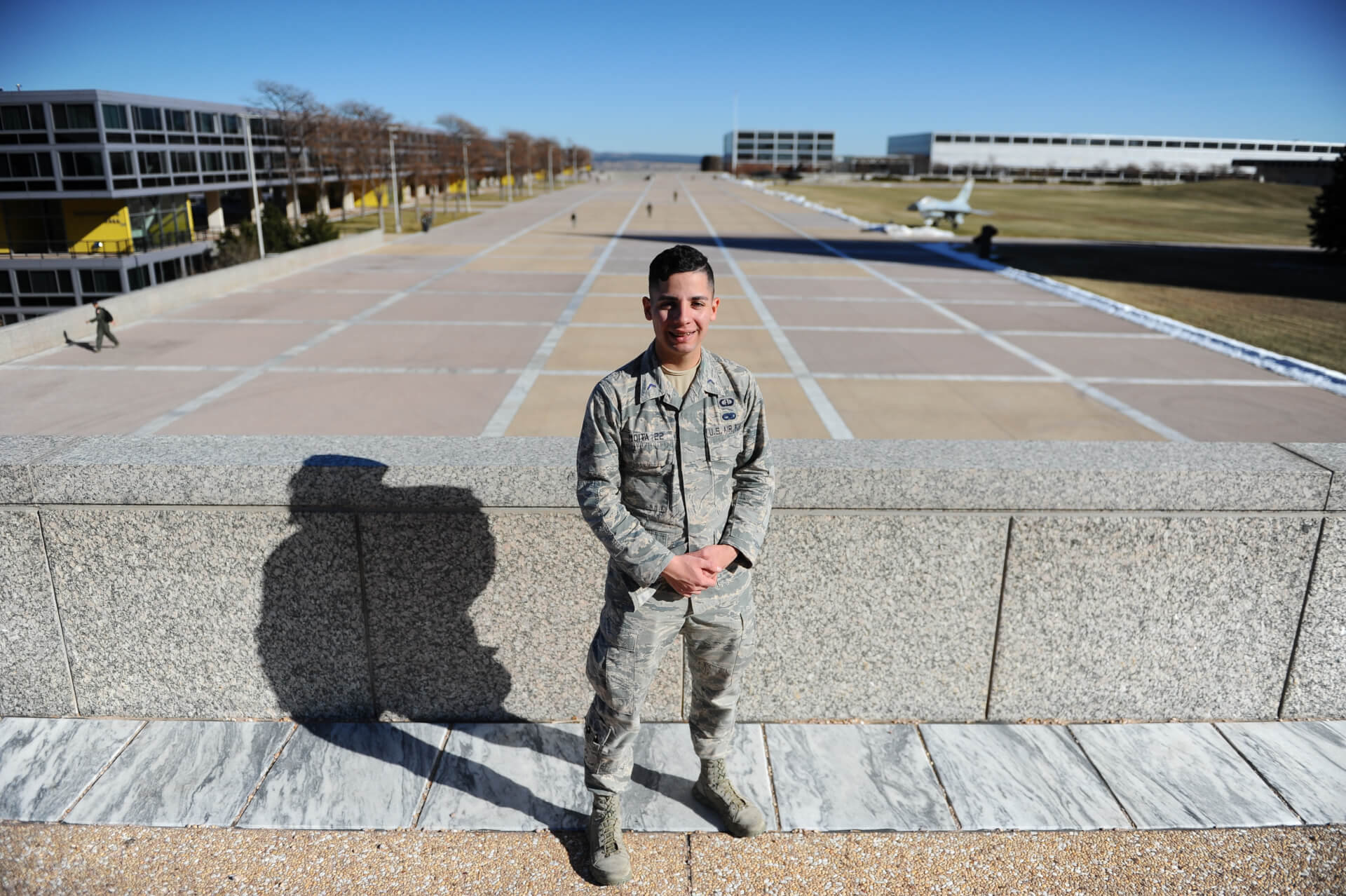 It was Oct. 15, 2018, Monday morning, and while his classmates chatted about their weekend, Moita was in the grip of a nervous breakdown.

“I was very nervous and shaky,” he said. “My anxiety was going up and I felt like my thoughts were going 100 mph.”

Less than 48 hours earlier, a motorcycle rider drove through a red traffic signal at the Bijou Street and I-25 intersection and collided with the car Moita was driving. Moita and his passengers were not injured, but the motorcyclist was pronounced dead later that day at a local hospital.

“When I came back to the Academy, I had all these emotions,” he said. “One of the big things was that everyone was talking about their weekend and asking me, ‘how was your weekend?’ and I had an anxiety attack.”

Moita, 23, is a third class cadet – a sophomore – at the Air Force Academy. He’s chatty, engaging and smart. He wants to fly KC-46 tanker aircraft after he graduates in 2022.

He grew up in the town of Wasco, in California’s agriculture-rich San Joaquin Valley, 140 miles north of Los Angeles. Running, soccer, and playing Flight Simulator X on the home computer are just a few of his childhood hobbies.

Moita has a twin brother and younger sister.

“Living in the country, my brother and I were very creative,” he said. “There wasn’t much to do unless you felt like driving 30 miles to Bakersfield.”

Moita’s family is ethnically diverse: his father is Brazilian and his mother is Mexican.

“There’s a lot of immigrants in Wasco,” he said. “It’s probably like 90 percent Hispanic, so I grew up speaking three languages.”

Moita graduated from Wasco High in 2014 at the top of his class, 13 out of 300. He was a cross country and track star for the Wasco Tigers, running a sub-five- minute mile in his sophomore year.

Recalling his childhood, he said “Yeah, I’d say I was happy.”

Moita’s path to the Academy wasn’t the most direct. He enlisted in the Air Force in 2015 and took the SAT five times and the ACT three times before being admitted to the Academy.

Before the collision, his GPA and finances topped his list of concerns.

“When I got to the Academy, I was worried about paying for a car I wasn’t allowed to drive,” he said.

Moita also grappled with family issues, including the deaths of the parents of two close friends. He’s had trouble balancing his hefty academic schedule with his cadet responsibilities. He’s the flag bearer – the “Guidon” — for Cadet Squadron 16, a member of his squadron’s support staff, a Sexual Assault Response Coordinator liaison, and a “PEER” – a Personal, Ethics and Education Representative.

Moita thought about dropping out.

“After being enlisted, it was really hard to adapt to the Academy,” he said. “I told myself, ‘I can’t do this anymore. It sucks.”’

Moita said the traffic collision was the final straw in his boatload of stress.

“I always thought I was fine, but I didn’t know how much I was tackling until the accident,” he said.

This is when Moita’s academy military trainers – including Tech. Sgt. Michael Hinojosa – saw to it that he got help.

Hinojosa is an academy military training for Cadet Squadron 16. He and the other AMTs guide cadets from the moment they arrive for basic training. Cadets often ask their favorite AMT to give them their first official salute at their commissioning ceremonies.

“The PPC is extremely valuable,” Hinojosa said. “They help [cadets] even when it means referring them for advanced treatment. Having them available is a great benefit.”

The PPC is an accredited college counseling center staffed by behavioral health experts who offer short-term, individual therapy for a variety of behavioral challenges.

Capt. Robin Morris, a licensed social worker at the PPC, said the care provided at the center is tailored to each cadets’ needs.

“Everyone is an individual and we know trauma happens to everyone in life,” she said.

The PPC is the only center of its type in the Air Force, but it’s even more unique because behavioral health experts there train cadets to help other cadets. They train them to become PEERs.

“The PEERs speak the language, know the culture and respond to the needs of cadets in a genuine and authentic way,” Morris said.

Moita said it was “definitely a struggle to get help,” before getting to the PPC, but he’s become more comfortable as his therapy continues.

“I definitely feel a better and I try to help out other cadets,” he said. “I’ve been able to help out a lot of freshmen going through a difficult time. They feel comfortable with me, knowing that I can relate to what they’re going through.

“People told me after the accident that my personality had changed,” he said. “I was more serious and emotional. I just wasn’t as social or talkative. Just walking down the hallways or listening to other cadets crack jokes was too much.”

“There’s been a significant improvement in how Cadet Moita manages his stress and in his overall health,” he said. “Anyone will tell you that Moita is a good person with great intentions. He loves to help people.”

This chapter of Moita’s story ends well, but he’s still a work in progress. In the year since the collision, he’s been assigned a therapist. He’s happy to share his story with other cadets and is no longer afraid of appearing vulnerable.

“I’ve talked to people about my issues and they say ‘wow. I never knew how much was happening with you,’” he said.

Moita is taking his recovery one step at a time.

Moita said that he never thought about suicide but understands how smaller challenges can add up and lead to such a fateful decision.

“I now understand that you can’t be resilient until you learn to cope with your own challenges,” he said. “I know what it means now to take a step back and put your oxygen mask on before you help others.”