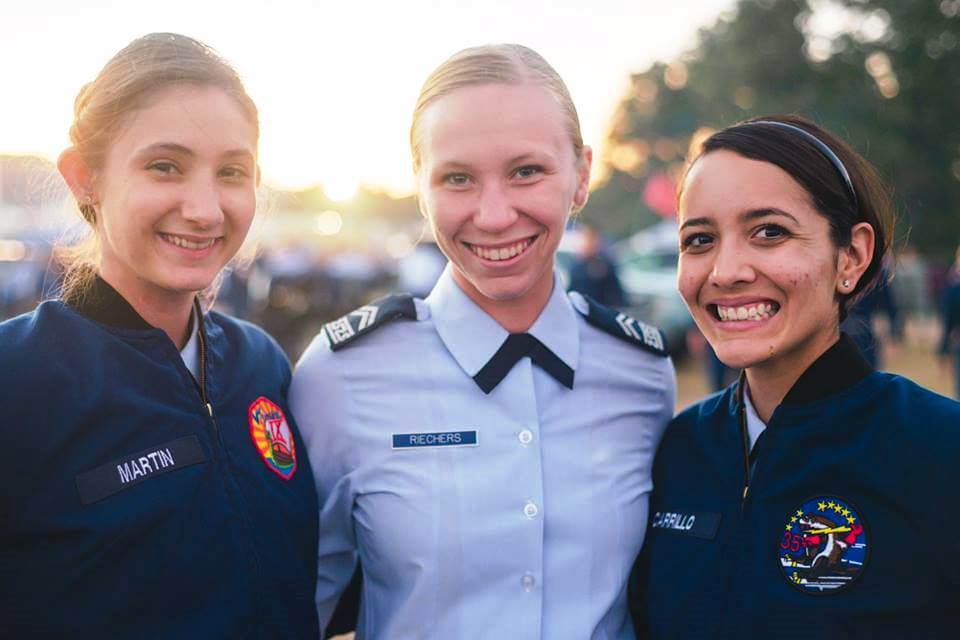 Scooby is a 200-pound English Mastiff living in Gilbert, Arizona. He snores when he sleeps, smells funny and makes a mess when he drinks water, but he’s loved by his owner, Cadet 2nd Class Emily June Martin.

“I miss Scooby,” Emily said. “He’s the best ‘snuggler’ ever. Mastiffs are so easy. He can’t go more than a block without sitting down. When I go home, we chill together.”

Scooby isn’t the only animal the Martin family cared for while Emily grew up in the suburbs of Phoenix with her eight — yes, eight — brothers and sisters. In Emily’s lifetime, the family owned another mastiff, a Guinea Pig, two rabbits (or “bunnies,” as Emily calls them), a pig, a pug and now Scooby.

“We were actually a zoo for a little while,” Emily said. “Right now, we have (cats) Tuxedo and Scrumpy, and (dogs) Scooby and Nelly, and my mom has a saltwater fish tank.”

Emily, 21, was the middle child in a very close family.

“I was five out of nine. I don’t know how we all fit,” she said. “We had four bedrooms but had to build another. We would switch-off to see who got to share with who.”

The Martin family was close in ways other than mere proximity. Among their favorite activities when the kids were young were long road trips.

“Mom hates to fly so we would drive everywhere,” Emily said. “We were always traveling, and traveling to random places. We had a red minivan for a while and then my parents got a bronze Buick Terraza. Luckily, that has since died and my parents no longer live the minivan life.”

“On the way back, we drove through Nebraska and got stuck because someone stole my dad’s credit card information,” she said. “We couldn’t pay for anything. We lived on hotdogs, and peanut butter and jelly sandwiches and tent-camped. It was a mess but it was a really good time.”

Staci described Emily as a smart child who worked hard at school and gymnastics.

“She was focused but could turn it off and play usually,” she said. “She was happy, but mature — an ‘Old Soul.’ She always wanted to do her best at whatever she was doing.”

“One day I [go into] the master bedroom — Emily was about 2,” she said. “I go in and there she is, all proud, with the brightest red lipstick all over her face, all over the carpet, all over the white-washed cabinets. We could only laugh and take a picture of her. It was quite cute.”

Above all, Tony said Emily is tough. She was a Level 10 gymnast. He recalled an example of Emily’s character during a gymnastic competition in Tucson when she was in elementary school.

“Emily was always tall and lanky and some of the judges didn’t think much of her,” he said. “She fell on the balance beam. She finished the routine with bruises on her face and leg and bowed in front of the audience. And then she cried. It told the judges she was tough.”

Emily graduated from Arizona Connections Academy, a tuition-free K-12 public online school offering college preparatory courses, in 2013. She researched college scholarships during her sophomore year in the hope her gymnastics skills might get her into a well-known university.

A gymnastics coach at the Air Force Academy reached out to Emily, but she didn’t tell her parents about her aspirations until the coach staged a visit to Gilbert.

“I actually didn’t tell my parents about talking to the coach,” she said. “One time, he was in town. I told my parents, ‘Hey, he’s in town and wants to talk to me.’ Once I told my parents what I planned to do, they had some reservations, but they were very excited for me.”

Tony said his excitement for Emily came just a bit later. First, he had to wrestle with apprehension.

“My first emotion was fear,” he said. “I’d already had one child (former soldier Anthony Boyd) with two 15-month tours in Iraq. I was really scared at first but now, whenever I go to the Academy, I feel like I’m walking among heroes. I know they’re just kids, but that’s what makes them heroes.”

Staci wrestled with her own anxiety.

“I was concerned and proud she would want to be of service to our country,” she said. “I was also concerned she didn’t quite realize the commitment she was agreeing to.”

Emily grappled with her underwhelming ACT scores before getting to the Academy.

“I took them five times. I wanted it that badly,” she said. “It’s been my dream to be a pilot since I was little and this was the only way I knew how to do it.”

Emily reported to Basic Cadet Training in June 2013 carrying only a small black backpack. Tony and Staci walked with her through the long processing line as it wound through the trees near Doolittle Hall. They were both crying, she said.

“That day was a combination of pride and being afraid for her,” Tony said. “She’s going to be our first officer in the family.”

Emily was one of six women in her BCT flight.

“In-processing Day was really tough. I don’t think I knew what I was getting into,” she said. “It was total culture shock, but today there is nowhere else I’d rather be. I feel so much more confident in myself.”

The trick to surviving BCT, Emily said, is the same trick to earning a commission here.

“It’s simple. It’s all teamwork,” she said. “In BCT, we learned teamwork really fast. If we didn’t learn to rely on each other, there was no reason to be there.”

Emily now majors in political science with a minor in French.

Staci said parents should not be anxious about the prospect of their child being accepted to the Academy.

“If parents are worried about their child joining a service academy, I would tell them not to worry, especially at the Air Force Academy,” she said. “It’s a great choice for their child’s future.”

In the case of Emily, Staci says she couldn’t be happier.

“I’m extremely proud of her holding her own at the Academy,” Staci said. “Her being able to thrive and survive at the Academy really impresses me.”

For Emily, the teamwork she describes among Academy cadets has morphed into family.

“I’ve learned so much from having such a big family, and now my friends here are all my family,” she said.

Along with Scooby and the rest of the Martin family menagerie in Gilbert, Emily has friends here too, including Cadets 2nd Class KateLyn Riechers, Nicolas Ouano and Catherine Carrillo.

“If I had to choose three words to describe Emily, they would be ‘hard-working,’ ‘mature’ and ‘independent,’” Riechers said. “In our friends-group, we always joke she’s the ‘mom’ because more than anyone, she always looks out for us.”

“We lovingly and jokingly call Emily the ‘mom’ of the group. She has a huge heart and always seems to know what’s best,” he said. “We’ve all come to Emily with our problems and she’ll give us advice  without fail that is somehow right, or at least what we needed to hear at the time.

Ouana appreciates how Emily enjoys the “little things in life,” including her daily white chocolate mocha with a pump of raspberry she calls “a hug-in-a-cup.”

“She helps us remember to enjoy life and makes even the most stressful of cadet days better,” he said.

Riechers and Martin were roommates until Martin was assigned to CS-09, during the “squadron shuffle,” which takes place before cadets begin their junior year.

“This year, we all moved into new squadrons, and she really impressed me,” Riechers said. “Moving can be difficult, but she really embraced this change and became super-immersed in her squadron, helping out in any way she could.”

Along with a daily sense of joy, Carrillo says Emily knows how to balance leadership with compassion.

“Emily brings an unparalleled grounding force and wisdom beyond her years,” Carrillo said. “She is one of the few people in this world who can reach me when I’m in full-stress mode and bring me back to a calm, level-headed place, a nearly impossible feat, and she always has the best advice to give in any circumstance whether it’s military, academic, athletic or personal. She takes into consideration the problem and my character and creates the perfect solution.”

In CS-09, Emily is the squadron’s operations NCO.

“Mostly, I compile and organize the weekly action reports, complete ‘taskers’ and act as the scribe for any official squadron functions,” she said. “When I was a gymnast, I really learned time management. Time management is the goal here. If you can do that, you can do anything.”

Emily laughs when her friends accuse her of being incredibly organized.

Emily’s career as an Academy gymnast ended after an injury and surgeries took her off the mat of the game, but the change in direction didn’t faze her much.

“There’s a purpose for everything,” she said. “I wanted to be the best cadet I could be so I chose something else, another way to do that.”

Emily said a large part of enjoying life is learning something new, like her current pursuit of Bollywood dancing, a form of Indian dance.

“Sometimes I try to do things that surprise people,” she said. “Last year, it was just working on making me a better person. It was just me, learning.”

“My bow is pink. It’s so cute,” she said. “I want to experience everything I can and have as much fun as I can. The Academy has elements of fun. I surround myself with people who feel the same as I do. I just like to be with people.”

On the cadet-volunteer front, Emily is involved with the Fostering Hope Foundation, an organization advocating for the care of foster children.

“I organized their Halloween event last year and plan to do it again this year,” she said.

Her off-base hangouts include the Manitou Springs Penny Arcade and Jives Coffee.

Emily will spend time in France this summer, a trip sponsored by the Academy’s International Programs.

“I studied French for two years in high school,” she said. “My grandmother speaks French. She grew up in Germany; she was there during World War II.”

Emily also has plans after she graduates in 2017: a 60-day trip to Zambia.

“I’ve always been interested in African politics, and the beauty and the opportunity there. It’s so resource-rich,” she said.

In the meantime, before she graduates, Emily will concentrate on perfecting her flying skills.

“I soloed in a powered flight,” she said. “I’m flying my own plane now, but I’m still having trouble landing.”

For all the activities, Emily said the glue connecting her to the Academy is other cadets.

“You come to the Academy for a certain reason and you stay because of the people,” she said.