My brother Marco graduated from Basic Military Training when I was 12. I’ve always wanted to be like him. I remember watching Marco and the other newly-minted Airmen march onto the parade field at Joint-Base San Antonio. I was impressed and researched joining the U.S. military. I discovered the service academies but only had eyes for one: the Air Force Academy.

Now, several years later, I’m a cadet first class at the Academy. I will graduate in May with a bachelors in mathematics.

Getting here was not easy. I’m one in a family of three children born in Tampico, Tamaulipas, Mexico. My father, a sales director for a furniture company, moved us to Cerritos, California, when I was 8 years-old . Life was rough; I didn’t speak English and our extended family stayed in Mexico. I began third grade with no idea what was going on and copied the schoolwork of the boy next to me. For a few months, the language barrier kept me from doing well in all but one class: math. Math is universal; it deals with numbers, so there is no language barrier. Thus began my love for math.

Why the Academy? My dad studied to be a commercial pilot in Mexico. He earned a lot of flying hours but couldn’t complete the course due to its cost. He often told me how exciting and fun piloting an aircraft is. I knew I too wanted to become a pilot. 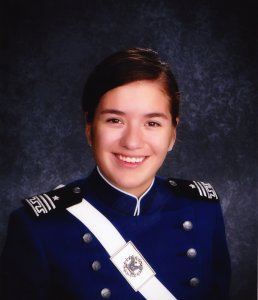 “I want young Hispanic women to know they too can challenge themselves for the better. The camaraderie among cadets will pull them in.” – Cadet 1st Class Cinthya Elizondo-Gamez, Cadet Squadron 36

I told my parents I wanted to apply to the Academy when I was in the seventh grade. They’ve always supported my decisions and were ecstatic. I worked hard in school, joined the cross country and track teams, and took honors and advanced placement classes to make myself a better candidate for the Academy. The Academy’s application process is rigorous, but I never gave up and gave my all to get the best grades possible.

My parents are proud. My mom never imagined one of her children would attend a service academy. She’s proud that a woman born in Mexico can succeed as a cadet and as a U.S. citizen. My father is proud of the challenges I’ve faced to get to this point.

The Academy offers many great learning experiences. I traveled to Ali Al Salem Air Base, Kuwait, for a month and saw how Airmen live and work while deployed, and the sacrifices they make for the U.S.: the birthdays, holidays and graduations they miss. They trade the comforts of home to live in tents with air conditioning units that often stop in 120-degree temperatures. They give up their freedoms and comforts so we can have ours. I attended the Spanish Air Force Academy in Spain for a semester, met Spanish cadets and learned more about the their language and culture. I led training for 30 cadets during Basic Cadet Training, necessary for them to be fully recognized as cadets.

Had I not faced my challenges and fears, I would not be here. I knew the acceptance rate was low and I was scared of being rejected, but I applied.

I want young Hispanic women to know they too can challenge themselves for the better. The camaraderie among cadets will pull them in. I never knew how close I could grow to people in one year, let alone four. You become very close to cadets who experience the same highs and lows and build a bond that remains. I can count on my cadet brothers and sisters for anything and I trust them with my life.

My Academy experience and Air Force life can best be summed up by an email sent by a high school friend. She said, “I think that is an inspiring accomplishment. I say this because you’ve wanted to go to the Academy since you were little. And after all the years of hard work in school, sports, and your community, you made it. It’s really cool to know that you are a cadet, but it’s even more awesome to know that it is just the first of many accomplishments. You are an inspiration to everyone to aim for the stars.”