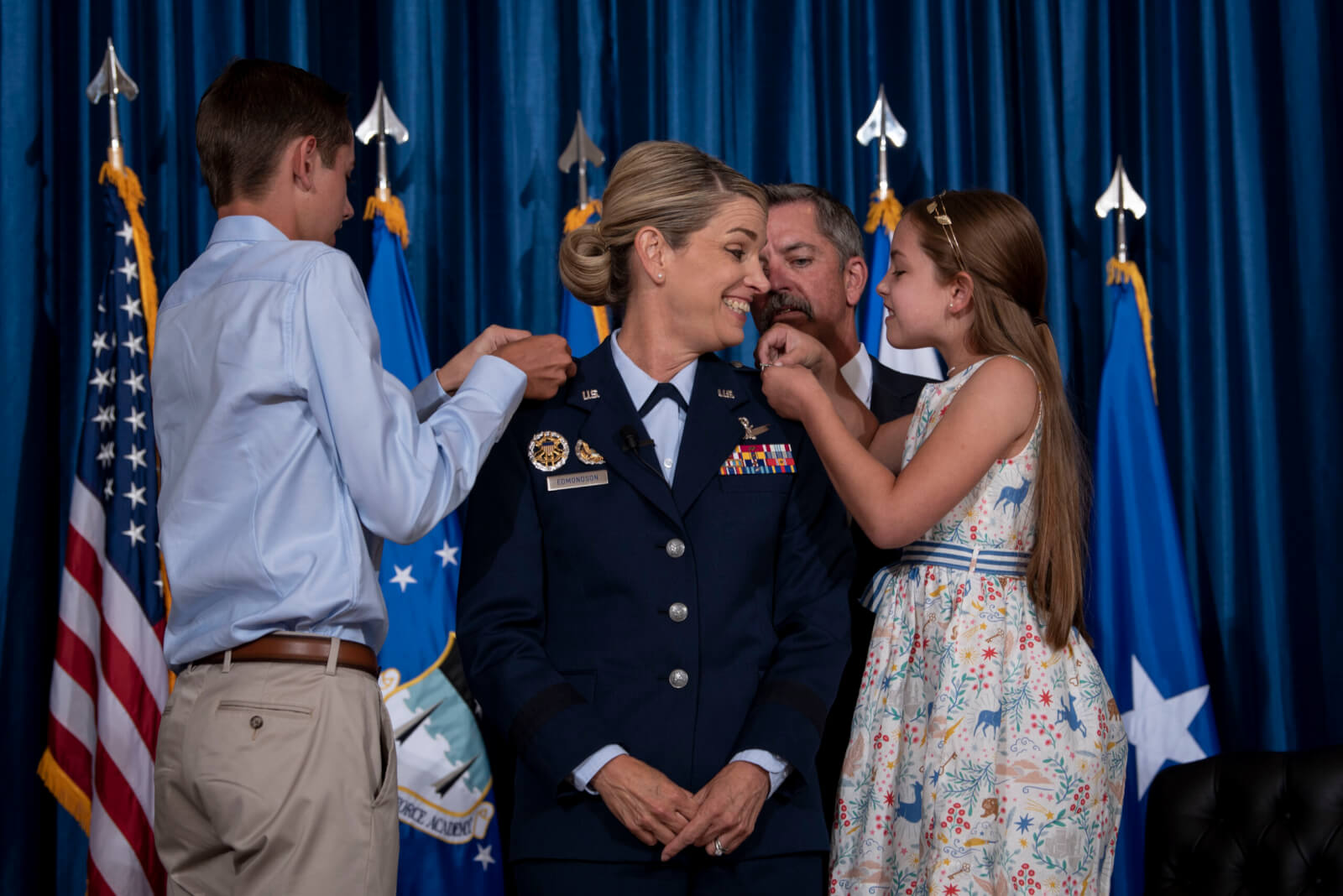 Maj. Gen. Michele Edmondson’s family pins on her second star during her promotion ceremony from brigadier general to major general, Sept. 3, 2020. Edmondson is the Air Force Academy’s commandant of cadets. While those in the audience at Edmondson’s promotion ceremony in Arnold Hall Ballroom sat at least six feet apart and wore face masks, family members may not wear face masks when in each other’s company.

“I contend the Air Force got ‘this one’ exactly right,” Wilson said about the service’s decision to promote Maj. Gen. Michele Edmondson.

Edmondson, the commandant since May 2019, is responsible for the military, leadership and character development of more than 4,000 cadets. The Senate confirmed the president’s nomination for her second star earlier this year.

“She’s exactly the right person at this critical time in our nation’s history to be the Academy’s commandant,” Wilson said, before reading the order signed by the secretary of the Air Force promoting Edmondson.

Wilson said Edmondson is a committed officer who delivers the right results at the right time, and has successfully led the cadet wing “in the midst of a global pandemic that has put unimaginable stress on the Air Force and our nation,” he said.

Edmondson is the Academy’s 29th commandant of cadets and only one-of-four officers to serve as a major general in that position.

Edmondson was Wilson’s senior executive officer at the Pentagon from June 2017 to August 2018. The commandant thanked Wilson for his support of her career, and Lt. Gen. Jay Silveria for his advocacy of the cadet wing as the Academy’s superintendent.

“There is nothing more anyone can ask for than to be trusted by their boss,” she said, speaking directly to Silveria. “I want to thank you for trusting me and for allowing me to do my job.”

Edmondson’s promotion took place in Arnold Hall Ballroom. There were 40-to-50 people there, but they filled the large room, sitting in chairs six feet apart, or more.

The same parameters placed on cadets and staff at the school governed the event.

“Then ‘the COVID’ hit,” Edmondson said to the audience. “The journey we’ve had in the last six months has been the hardest journey of my life.”

The commandant spoke about what she called “Herculean efforts” by cadets, faculty, and staff to keep the Academy functioning during a pandemic.

“I’d be lying if I told you it wasn’t the hardest thing I have ever done,” she said.

Edmondson said the Academy’s ability to complete its mission of developing leaders of character as it grapples with the restrictions of the coronavirus is the result of cadets’ concern for their alma mater.

“Our success lies in our cadets,” she said, pointing to several cadets in the audience involved in the plans to keep the school up-and-running despite the pandemic. “It’s unbelievable what this cadet wing took on and they did it.”

Edmondson spoke of the challenges of hosting a graduation event for the class of 2020.

The commandant mentioned the tests and trials of hosting the arrival of more than 1,000 young men and women slated to begin Basic Cadet Training in June.

Edmondson also discussed how her staff overcame the challenges of hosting online distance learning for 3,000 underclassmen who left the Academy in March to continue their studies just after the disease reached pandemic proportions. She said the Academy was the first service academy that successfully brought cadets and midshipmen back to campus.

“Not only did we do it, we did it incredibly well,” she said.

Despite the obstacles of keeping the Academy safe while being involved in nearly every aspect of cadets’ lives, Edmondson said serving as the commandant of cadets has been the most rewarding experience of her life.

“This has been a phenomenal journey,” she said. “I don’t think any of us thought we’d be here [after the coronavirus became a pandemic],” she said, “but we did it because of this team.”

Wilson said Edmondson’s accomplishments are the results of her love for cadets, Airmen and the Air Force. He said the commandant has proved her ability to lead the cadet wing through vague and uncertain times.

“You’ve done exactly that and more in the most challenging situations,” he said to her. 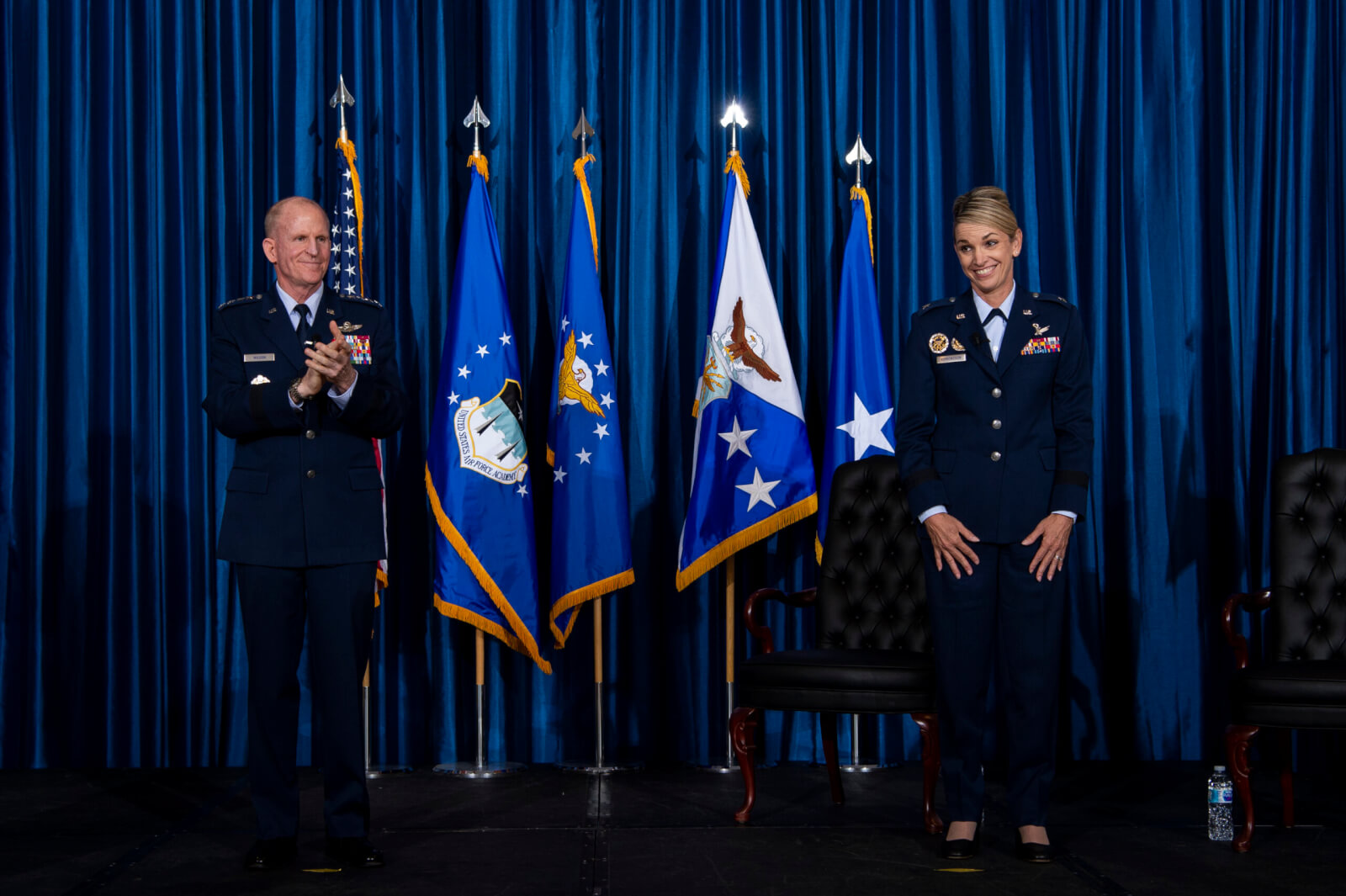