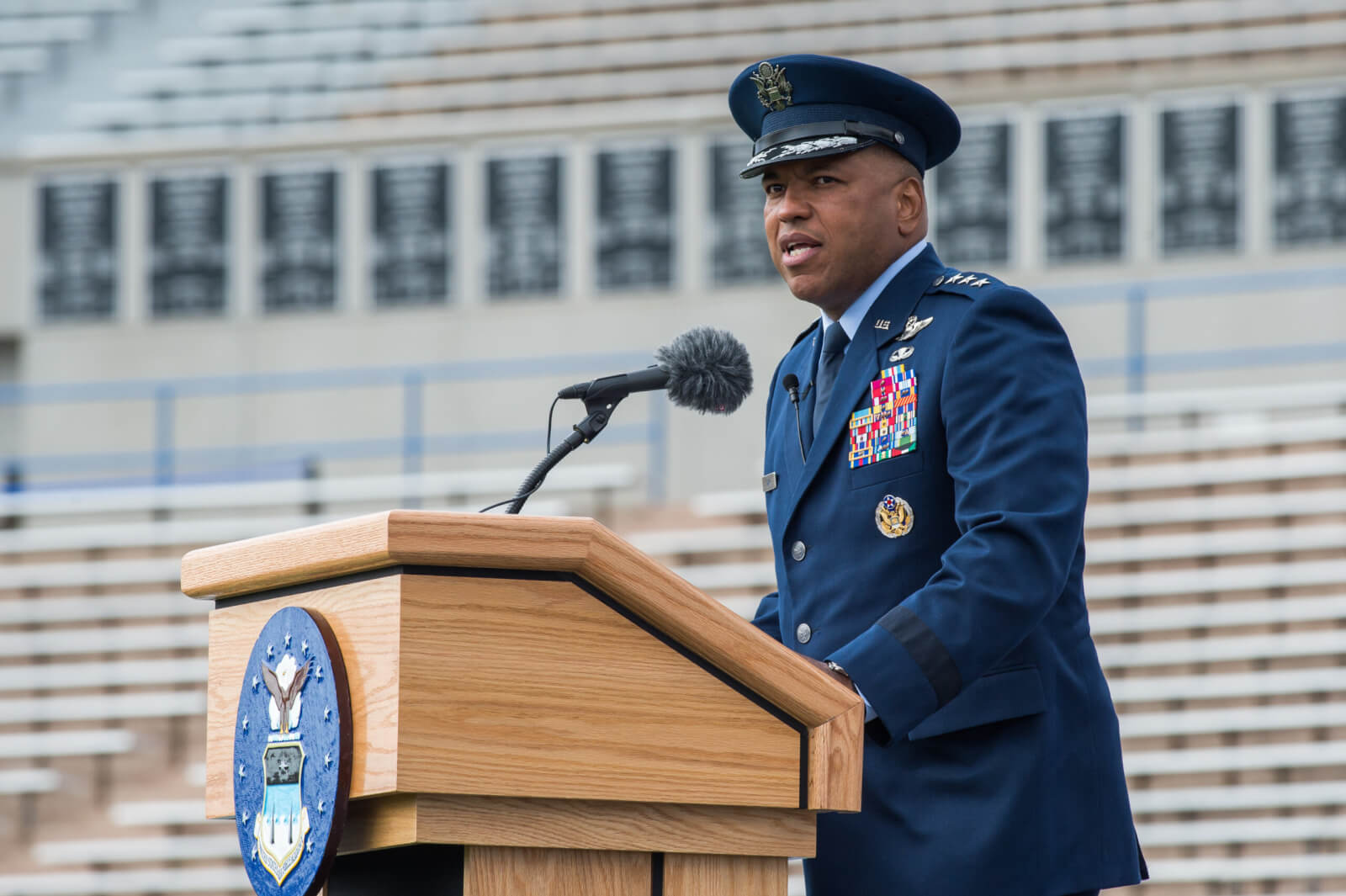 He’s the new superintendent at the Air Force Academy and while he knows he’s got big responsibilities to handle as the school’s top officer, he said the weight of those duties is eased by the enthusiasm he feels about cadets.

“They are why I’m here. They are why we’re all here,” he said. “Doing all I can to enhance their development and make their dreams come true is my sole purpose during my time at the Academy.”

As superintendent, Clark directs a four-year regimen of military training, academics, athletic and character development programs leading to a bachelor of Science degree and a commission as a second lieutenant.

“I am humbled and honored to take command,” he said to an audience of faculty and staff at the ceremony. “I want to thank Lt. Gen. Silveria for his incredible 35 years of selfless service and especially for his exceptional leadership at the Academy.”

Clark graduated from the Academy in 1986. He’s a command pilot, national security scholar and a former commandant of cadets. He said his top priority as superintendent is fulfilling the Academy’s mission of developing leaders of character.

“We must ensure that when our graduates are judged by the content of their character that the judgment always rules in their favor,” he said.

Building on Silveria’s efforts to continue to keep the school open and safe during the ongoing coronavirus pandemic also ranks high on Clark’s “to do” list.

“COVID-19 is not done with us,” he said. “We will continue the brilliant approach [Silveria] adapted with a reliance on scientific and mathematical expertise and extraordinary teamwork. We will win this battle.”

Brown said Clark is the right senior officer to be superintendent.

“He’s demonstrated leadership as a previous commandant of cadets, as a commander at the squadron and wing levels, and twice at the Numbered Air Force level,” he said. “He brings a wealth of joint-leadership expertise. He’s the right leader to foster education, empowerment and enthusiasm the Air Force needs for the future.”

Brown hailed Silveria for his “tremendous advancements” as superintendent.

“He’s overseen improvements in the Science, Technology, Engineering and Mathematics –‘STEM’— curriculum and used technology to advance the cadet learning experience,” he said. “In 2018, as the National Defense Strategy shifted our collective attention to great power competition, he challenged his Academy team to expand their operational focus, keying in on China and Russia.

“Since the very first cadet was diagnosed with COVID-19 last March, Lt. Gen. Silveria and his team have led with care, compassion and decisiveness while continuing the critical Academy mission of developing future officers,” he said.

Silveria said he’s excited for Clark and his family.

“I can’t imagine anyone else I would be more excited about to take over as superintendent,” he said, speaking directly to Clark. “You will no doubt take the Academy to even greater heights. This position is like no other in the Department of the Air Force and I look forward to being a ‘prior superintendent,’ like those before me who were ready to help me when I called them. I will be there for you in the same way.”

Raymond praised Silveria for aligning the Academy’s curriculum to create officers for the nearly year-old Space Force and said Clark is an expert aviator and a distinguished and highly regarded commander.

“[Clark] has the initiative, character and talent to develop the bold officers we need to fly, fight and win,” he said.

Barrett called the change of command a historical event for the Air Force and the Academy. She said Clark now has the responsibilities of a college president and a military commander at the Air Force’s only academy.

“The Air Force Academy is the heart of the U.S. Air and Space forces and a champion of our core values,” she said.

Clark thanked the Academy’s special interest and constituency groups including the Association of Graduates; the Falcon Foundation; the cadet wing, Colorado Springs Mayor John Suthers; and other individuals and organizations for their support.

Clark ended his speech with a message to cadets.

“You are my purpose for being here,” he said. “The bragging right for toughness will belong to the classes who persevere during these times. It will be my greatest honor to help you achieve your dreams. Tough times do not last. Tough people do. Let’s do this.” 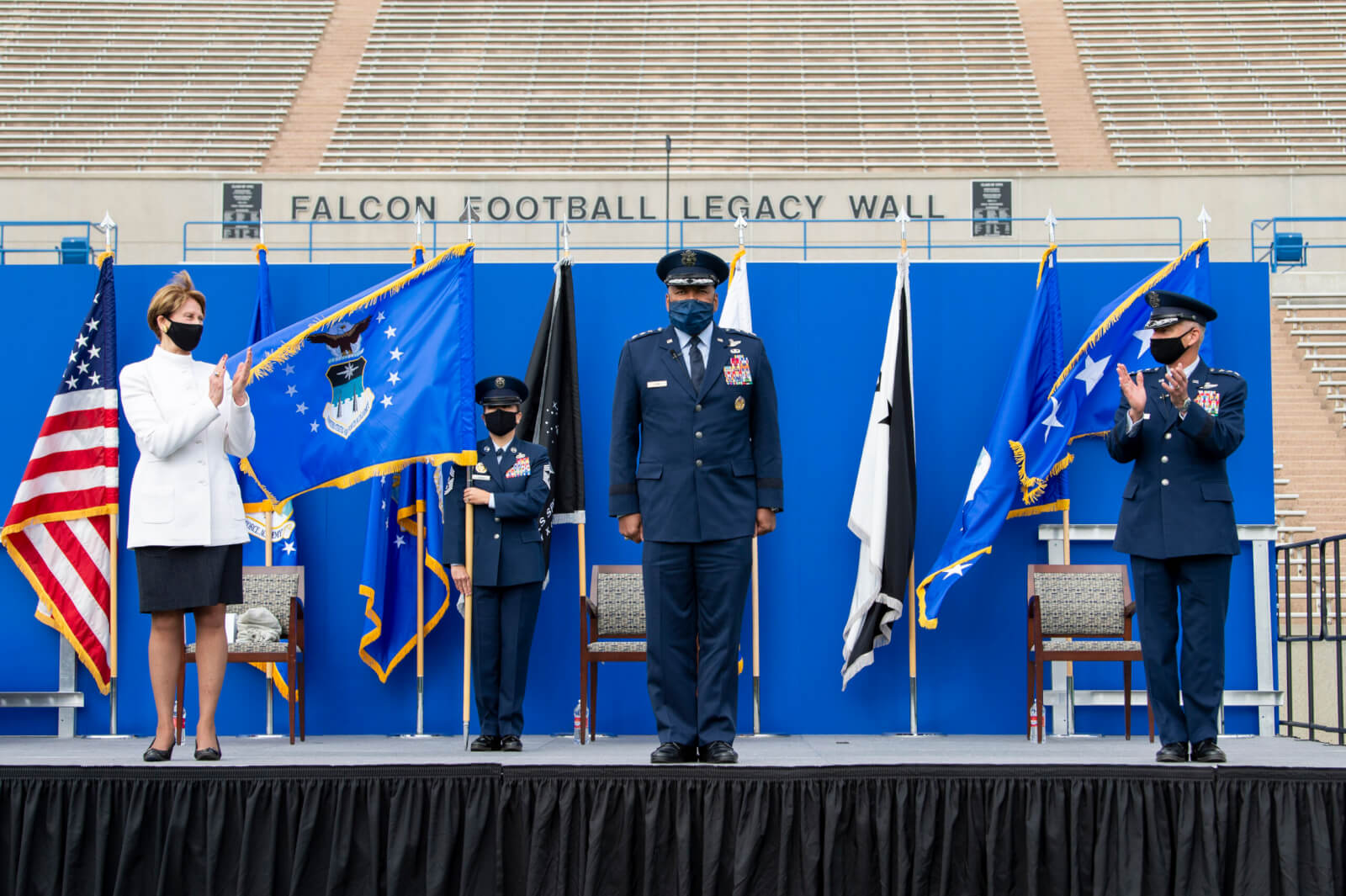 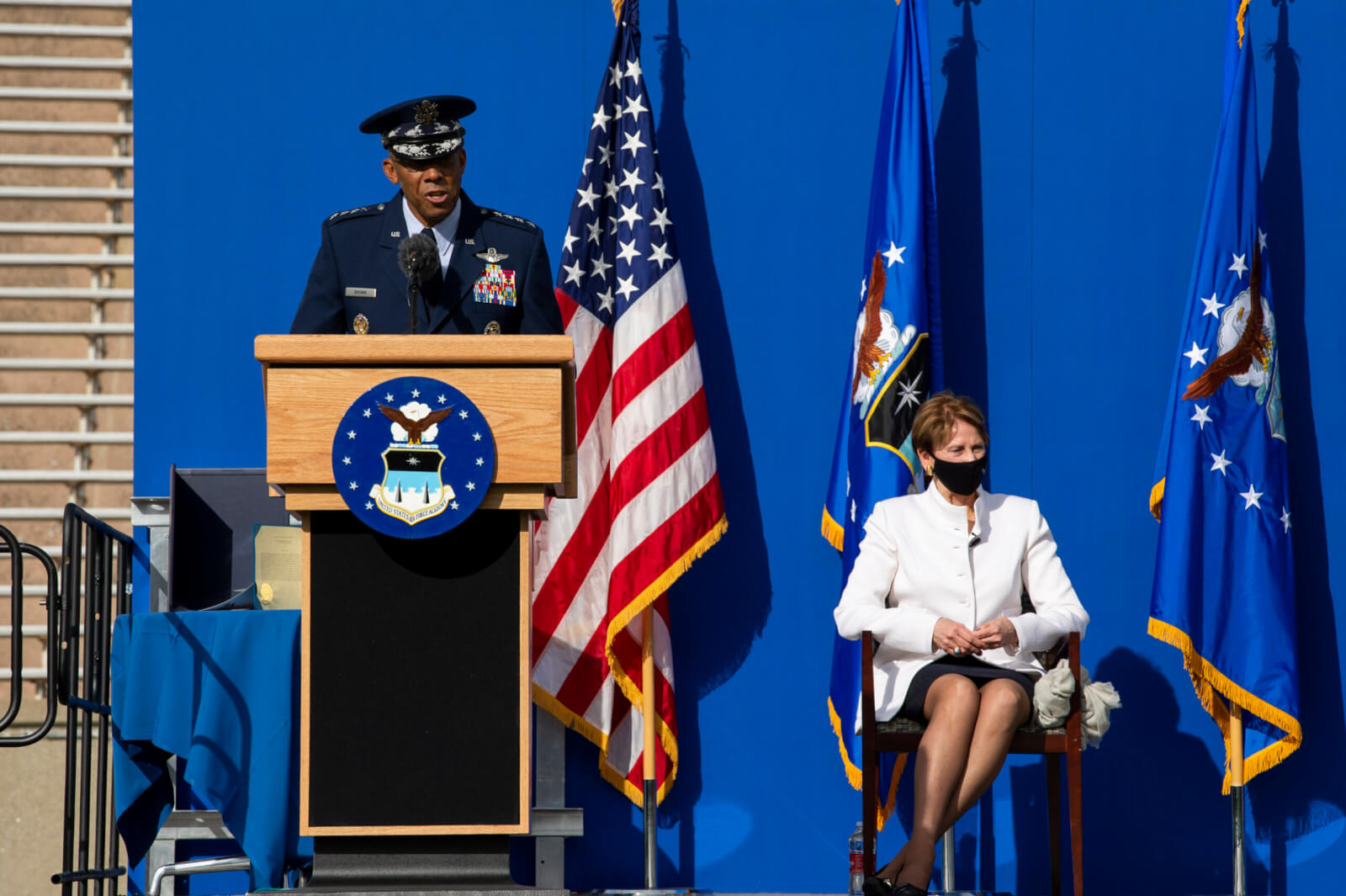