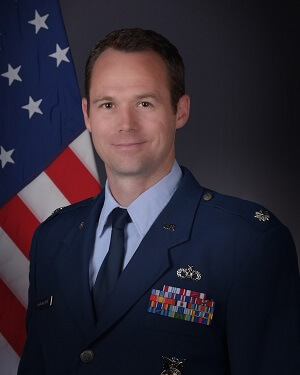 Lieutenant Colonel Bongioanni graduated and earned his commission from the USAF Academy in 2005. Upon graduation, his first duty assignment was Los Angeles Air Force Base where he was selected as the Officer in Charge of Quality Assurance and subsequently to lead the largest flight in the squadron with 101 military, civilian, and contractor personnel as the Operations Flight Commander.  He then obtained a Master of Science degree with a specialty in Geotechnical Engineering at the University of California, Berkeley. He served on the Expeditionary Engineering staff at HQ AF Civil Engineer Support Agency (AFCESA) before serving as Chief, Airfield Pavement Evaluation Team. Next, he was the Deputy Branch Chief for Energy at AF Space Command and then served as Executive Officer to the Director of Logistics and Installation Support. Doctor Bongioanni was an Assistant Professor at the USAF Academy, Department of Civil & Environmental Engineering. Colonel Bongioanni deployed as the Air Infrastructure Officer in support of Operation Enduring Freedom at HQ International Security Assistance Force in Kabul, Afghanistan.  He also deployed to Herat, Mazar-e-Sharif, and Camps Dwyer and Bastion as Airfield Pavement Evaluation Team Chief to determine critical airfield capacity and predicted lifespans for combatant commanders.

Repeatability and Agreement of Various High-Speed Macrotexture Measurement Devices, Journal of the Transportation Research Board, 2018.