Department of Behavioral Sciences and Leadership 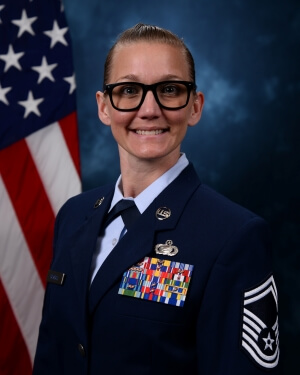 SMSgt Gloria L. Kuzmicki is an Instructor at the Department of Behavioral Sciences and Leadership, Dean of Faculty, USAF Academy, Colorado Springs, CO. She is the Leadership 300 course director, leading five faculty who teach over 1,000 cadets annually, with a goal of providing a world-class undergraduate education.  Sergeant Kuzmicki coordinates with Senior Faculty and the Director of Academic Operations to schedule 40 faculty and 25 academic courses for over 3,500 cadets annually.  Finally, as an Academic Enlisted Faculty, she collects and reports research data across commissioning sources and advises Senior Enlisted Leaders on development of the career field.

Sergeant Kuzmicki enlisted in the Air Force in February 2003.  She graduated from the Information Management course at Keesler Air Force Base in May 2004.  Throughout her career she has provided support while serving at the detachment, squadron, group and wing levels under five separate major commands.  Her assignments include bases in North Carolina, Arizona, South Korea, North Dakota, and New Mexico.  Additionally, she has deployed in support of operations ENDURING FREEDOM and INHERENT RESOLVE.

Prior to assuming her current position, Sergeant Kuzmicki was the Superintendent of Resiliency Operations and directed the installation onboarding program.  Additionally, she served as the Base Functional Manager for Administration, coordinating training, manning, deployment and overseeing career progression for 25 wing and 6 tenant positions across 4 Major Commands.

Diversity, Equity, and Inclusion in the Workplace, University of South Florida (2021)

USAFA Dean of Faculty Senior Noncommissioned Officer of the Year (2019)