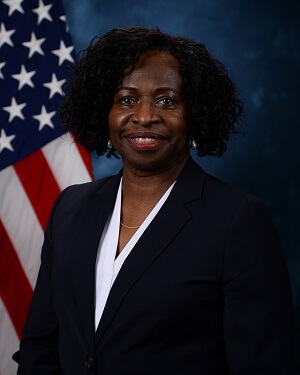 Colonel (Ret) Gail Benjamin Colvin is the Director of Staff, United States Air Force Academy (USAFA), Colorado Springs, Colorado the nation’s premier institution for developing officers and leaders of character dedicated to service to our nation.  A key member of the university president’s cabinet, Ms. Colvin serves as the Academy’s Chief Business Officer, overseeing a broad range of administrative, policy and organizational functions of the Academy’s 550 person staff supporting the commissioning and university missions as well as the installation’s 10,000 personnel workforce, $450 million budget and over $9 billion in real property and infrastructure.

Her thirty year military career is marked by diversified leadership experience in a wide variety of disciplines including joint military doctrine, research and development and weapon systems acquisition. She has commanded at the squadron and group level and served in a variety of positions at the Joint Staff, Headquarters United States Air Force, and major command levels. Colonel Colvin served as the Chief of Joint Doctrine for the Chairman of the Joint Chiefs of Staff and headed the U.S. delegation to the NATO subcommittee on Allied Joint doctrine. A native of Brooklyn, New York, she graduated from the Academy as a member of the first class with women in 1980.

She is a board member of the Colorado Federal Executive Board developing strategies and serving as a catalyst to increase government effectiveness for over 250 federal field offices; 53,000 civilian federal employees and 40,000 military personnel at six military installations throughout the state. She currently serves on several community boards to include the Colorado Springs Black Advisory Council. She also serves on the El Pomar Foundation’s Pikes Peak Regional Council helping to identify and resource local needs in Teller County through multi-year grants across that support various initiatives to include veteran’s issues, incentives and assistance for early childhood and post-secondary education.

Ms. Colvin earned a Masters Degree in Business Administration from Rensselaer Polytechnic Institute, a Masters in National Security and Strategic Studies from Air War College, and is a certified Level 3 acquisition professional. She is the recipient of New York’s 2007 USO Military Leadership Award, the Academy’s 2008 Roy Wilkins NAACP award, and is the recipient of USAFA’s 2020 Distinguished Graduate Award.