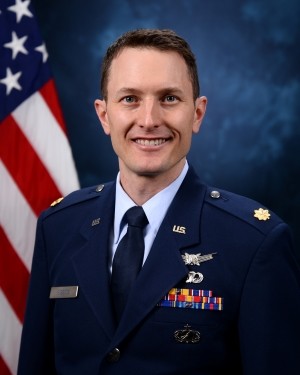 Major Daniel Higgins is a research scientist and adjunct instructor with the Department of Chemistry as an IMA reservist. He teaches both general and advanced chemistry specializing in nuclear topics, while also serving as a mentor to future Air Force leaders. Furthermore, Major Higgins leads novel research in advanced materials and nuclear sciences.

Maj Higgins received a Bachelor of Science in physics and earned a commission from the US Air Force Academy in 2006. Upon commissioning he was stationed at Hurlburt Field, FL as an Opposition Forces (OPFOR) Small Team Leader in the 1st Special Operations Support Squadron providing realistic training scenarios for US and allied special operations forces. He then joined the Nuclear Explosion Monitoring program at the Air Force Research Laboratory (AFRL) at Hanscom AFB, MA where he served as physicist in nuclear non-proliferation technology. He then earned a Master of Science in nuclear engineering from the Air Force Institute of Technology, Wright-Patterson AFB, OH specializing in nuclear weapons technology and positron physics and chemistry. From there he joined the Air Force Technical Application Center at Patrick AFB, FL specializing in nuclear non-proliferation technology and nuclear fuel cycle analyses. In 2015, Major Higgins transferred from active duty to the reserves at Kirtland AFB, NM where he served as a senior nuclear physicist supporting the office of the Chief Scientist at the Air Force Nuclear Weapons Center and as the IMA to the Branch Chief of Atomic Long-Range Systems in the AFRL Space Vehicles Directorate. In 2018, he earned a Doctorate of Philosophy from the Colorado School of Mines and completed a fellowship with the Los Alamos National Laboratory performing research in nuclear physics. Maj Higgins joined the chemistry department in the Fall of 2020. He enjoys spending time in the mountains hiking, skiing, and cycling with his wife Courtney and their dog Rocket.