Commander of the 10th Medical Group 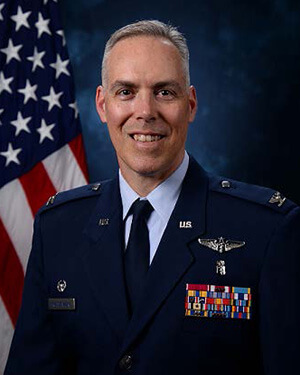 Colonel Christopher Grussendorf is the Commander, 10th Medical Group, and Command Surgeon, U.S. Air Force Academy, Colorado Springs, Colo. Col Grussendorf ensures healthcare for 4,739 cadets in addition to 19,373 active duty, retirees, and their families. He also oversees Colorado Springs Multi-Service Market for over 171,000 eligible beneficiaries and ensures deployment preparedness of 700 medics. Prior to this he served as the 72d Medical Group Commander, Tinker Air Force Base, Okla., and as the 78th Aerospace Medicine Squadron Commander, Robins Air Force Base, Ga.

Colonel Grussendorf is a native of Virginia Beach, Va. He attended Mary Washington College in Virginia where he earned his Bachelor of Science of Biology degree. He attended the Virginia Commonwealth University School of Medicine and earned his Doctor of Medicine degree. He was commissioned in the Air Force during his Family Medicine residency program. His first active duty assignment following medical training was at Little Rock Air Force Base, Ark. where he served as a family physician and flight surgeon. He attended the Johns Hopkins School of Public Health where he served as Chief Resident in Occupational and Environmental Medicine and earned his Master of Public Health degree. He completed a second residency in Occupational and Environmental Medicine, and is dual board certified. He served as Occupational Medicine Consultant at Edwards Air Force Base, Calif. Colonel Grussendorf later served as the Chief of the Medical Staff and Deputy Medical Group Commander for the 23d Medical Group, Moody Air Force Base, Ga. He has deployments as a physician during OEF and OIF. He is committed to preparing the Joint Warfighter for world-wide contingency operations, and delivering high quality, Trusted Care to our valued beneficiaries.

2013 ACC Chief of the Medical Staff Commitment to Excellence Award