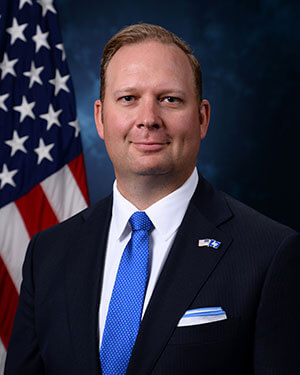 Nathan Pine has been named the Director of Athletics at the U.S. Air Force Academy. Pine comes to the Academy from Holy Cross, where he has been the director of athletics since December 2013.

During his tenure, the athletic department has seen unprecedented growth in fundraising. The Crusader Athletics Fund has more than doubled over the last four years and raised over $2-million during the 2017-2018 academic year. The CAF surpassed $2-million for the second year in a row and has now brought in over $1-million in each year of Pine's leadership, after having never reached that milestone previously. Holy Cross has also received two of the largest gifts in the history of the College ($32.5 million and $20 million respectively), directed toward athletics facility improvements. Construction on the $95 million Luth Athletic Complex began in December of 2015 and was completed in the spring of 2018. Pine has also orchestrated broader regional and national exposure for the College from television and marketing efforts, along with significant branding and alumni outreach. He has introduced a renewed sense of enthusiasm and excitement around athletics to Holy Cross along with a focused vision on improving the student-athlete experience, team and individual competitiveness and significant facility upgrades.

Pine has also championed the priority of academics at Holy Cross and student athletes have achieved at the very highest levels of Division I during his tenure, tying nationally for first place in 2014 and third place in 2015 in NCAA Graduation Success Rate (GSR). Additionally, Holy Cross led the nation with 75% of its teams earning NCAA Division I Academic Progress Rate public recognition awards in the 2017 report. Student athletes have combined for a 3.12 or higher GPA in each of the nine semesters under his leadership, highlighted by a record 3.26 average GPA in the spring of 2018. In addition, 338 Holy Cross student athletes were recognized on their league Academic Honor Rolls in 2017-2018.

Pine has improved football scheduling, adding a long-term home series with Harvard and Yale, while spearheading the efforts to bring the 2016 showdown with Fordham University to Yankee Stadium. Additionally, he has scheduled several BCS opponents beginning with a 2017 game at UConn (Holy Cross' first BCS foe since 2002) and future contests with Syracuse and Navy. In 2015, Pine hired Bill Carmody as the head men's basketball coach, a move which quickly energized the program. In Carmody’s first season, the Crusaders won the Patriot League title in dramatic fashion and then went on to win their first NCAA Tournament game in 63 years in the First Four. He has made a number of other notable coaching hires at Holy Cross bringing in Bob Chesney in football, David Berard in men's ice hockey, Amanda Belichick in women's lacrosse, Melissa Batie-Smoose in volleyball, Lindsay Jackson in field hockey, Casey Brown in women's soccer and Jen Lapicki to lead the soft ball program.

Pine was active at the national level and represented Holy Cross and the Patriot League as a member of the NCAA Division I FCS Football Committee and the NCAA Division I FCS Athletic Director's Association Executive Committee. He worked at the league level with the other athletic directors and the conference office to maximize the student-athlete experience and generate additional exposure and revenue for the Patriot League and Holy Cross.

Pine joined the Crusaders after serving as the deputy director of athletics at the University of Maryland. In addition to sport supervision of men's basketball, men's soccer, women's soccer and baseball, he oversaw all of the external support units and revenue generation for Maryland's athletic department including development, marketing, media relations, ticket operations and video services. Pine was also responsible for negotiating the majority of the department's business contracts including the multimedia partnership with CBS Collegiate Sports Properties and the Under Armour all-apparel deal, community engagement and the M Club (former letterwinners organization) as well as the athletics merchandising and eCommerce operations.

Prior to his time at Maryland, Pine spent three years at the University of California at Berkeley, where he oversaw all aspects of the major gift program and development staff for athletics. Pine led the university's athletics fundraising capital campaign, an unprecedented $500 million effort.

Pine previously spent four years at the U.S. Military Academy, where he was a key member of the athletic senior leadership team. He was responsible for all business initiatives for Army and oversight of the external operations areas for athletics. Pine also represented Army's interests in the coordination and execution of the contract extension with CBS Sports for the 2010-2018 Army-Navy football games, and he oversaw all elements of the Army-Navy sponsorship rights.

Pine began his career in the athletic department at Oregon State University, where he was instrumental in the growth of annual fundraising and the renovation of Reser Stadium during his five-plus years in Corvallis following graduation.

A native of Eagle Point, Ore., Pine received his bachelor's degree in marketing and international business from Oregon State University, and a master’s degree in education from the University of California at Berkeley. He and his wife, Stephanie, have two dogs, Deuce and Lola.