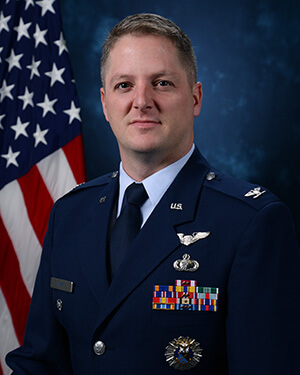 Colonel Brian Neff is the Head of the Department of Electrical and Computer Engineering at the U.S. Air Force Academy. He instructs students in a variety of classroom and laboratory courses, and leads the department’s 25 faculty, staff, and researchers in the instruction of approximately 1,400 students per year. Additionally, Colonel Neff directs an active research program including the Academy Center for Unmanned Aerial Systems (UAS) Research and maintains state of the art lab and test facilities.

Colonel Neff entered the Air Force in 1999 through Air Force ROTC at the University of Pittsburgh. He has deployed in support of Iraqi Freedom, where he was the Detachment Commander for the Joint Air Battle Staff. Colonel Neff was previously a permanent party faculty member at the USAF Test Pilot School and continues to serve as adjunct faculty, where he leads the test community in modernizing Electro-Optic flight test techniques. Prior to his current position, Colonel Neff was a squadron commander for the 746th Test Squadron, where he led the developmental test efforts for DoD global positioning system upgrades.

Three time USAF Test Pilot School Academic Instructor of the Year (Classes 15A, 14A, 13B)

Neff, B.J., Vijayagopal, R., Latifi, S., “Testing the reliability of a hypercube and folded hypercube in the presence of random and dynamic faults,” Proceedings of the International Conference on Parallel and Distributed Processing Techniques and Applications 3, pp. 1267-1271, 2003