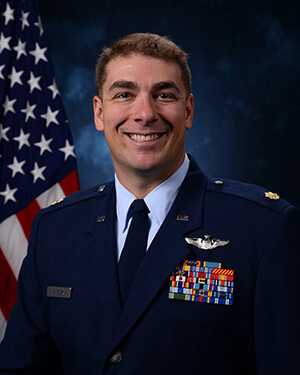 Lieutenant Colonel Jahara ‘FRANKY’ Matisek (PhD) is an Assistant Professor of Military and Strategic Studies (MSS) at the U.S. Air Force Academy, Colo., and is a two-time (2018-2020) Non-Resident Fellow at the Modern War Institute (MWI) at West Point, New York. Lt Col Matisek is a former C-17 Instructor Pilot and was a T-6 Instructor Pilot at the prestigious Euro-NATO Joint Jet Pilot Training (ENJJPT) program, and has over 1,000 combat hours. In 2020 he deployed to Afghanistan,flying the E-11 BACN (Battlefield Airborne Communications Node) as an Instructor Pilot and was the Commander and Director of Operations for the 451st Expeditionary Operational Support Squadron.

As the Director of Research at the Center for Airpower Studies(CAPS) he fosters a research-oriented environment for faculty and cadets. At CAPS, Lt Col Matisek mentors prospective authors on publishing innovative articles on strategy and warfare, while networking with other PME institutions and universities to enable American national security interests and the National Defense Strategy (NDS). His main intent is to establish CAPS and the MSS Department as world-class centers of forward thinking about future conflict, with a focus on how the US military, especially the US Space Force, can better transition towards dominating in a Multi-Domain War Fighting environment.

Finally, he is a Researcher/Investigator on the four-member team (Will Reno, Ryan Burke, and Buddhika Jayamaha) that was awarded $400,000 for their project “Foreign Military Training: Building Effective Host-Nation Armed Forces in Weak States,”by Minerva: Defense Education and Civilian University Research (DECUR) Partnership, Topic 3: Alliances and Burden Sharing. Their findings intend to improve the strategy and processes involved with American and Coalition Security Force Assistance (SFA) missions, such as the current TAA (Train, Advise, Assist) efforts in Afghanistan, A2E (Advise, Assist, Enable) in Syria, and other efforts throughout the world.

Blockchain and Bitcoin for Hybrid Warfare

“The Illogical Logic of American Entanglement in the Middle East.” Journal of Strategic Security 13, no.1 (2020): 1-25. (coauthored with Ryan Burke).

“Bitcoin’s Blockchain Technology for Hybrid Warfare: Laws to the Rescue?” Journal of Information Warfare 18, no. 1 (Winter 2019): 56-68. (coauthored with Wilson VornDick).

“Turkish Breakup with the U.S. and NATO: The Illogical Logics.” Journal of Political Risk 7, no. 5 (May 2019). (coauthored with Buddhika Jayamaha).

“The Soft Power of an American Cartoon: South Park and the Information War with China,”Modern War Institute, 14 October 2019.

“NATO at a Crossroads: Why Turkey is becoming such a Problem for the Alliance.” Modern War Institute, 7 June 2019. (coauthored with Buddhika Jayamaha)

“Executive Orders and Troops on the Border: Political Norms and the Securitization of American Problems.” Modern War Institute, 15 February 2019. (coauthored with Ryan Burke)

“The Strategic Crisis in the American Way of War: A Global Discount Security Shop?” The Strategy Bridge, 23 October 2018. (coauthored with Buddhika Jayamaha)

“Turkey and the U.S. on the Brink in Syria.” Columbia SIPA: Journal of International Affairs, 27 February 2018 (coauthored with Buddhika Jayamaha).

“Redefining Drones in the Professional Lexicon.” Over the Horizon: Multi-Domain Operations & Strategies, 1 September 2017.

“Drones and Airpower: A Lack of Deterrence in Unconventional Warfare.” Small Wars Journal11, no. 9, 2 September 2015.

“Senegal: How the Casamance Conflict did not impact society.” Chapter in: Security Threats, Militarization and Democratic Control of the Military, eds., David Kuehn and Yagil Levy, Lynne Rienner (forthcoming December 2020).

“Your Hamburger is a Matter of National Security: Veganism in Support of American Power.” US Army War College: War Room, with Cadet Kerilee Berger (under review)

“Civil Society as a Critical Battlespace: The Information Age Problem of Intensity and Connectivity.” Parameters, with Buddhika Jayamaha (under review)

“The Crisis of Security Sector Reform in Fragmented States: Oligopolies, Duopolies, and Monopolies of Violence.” with Joseph Greenbaum and Buddhika Jayamaha (in-progress)

“The Case for Staying in the Middle East: The Dilemma of American Military Assistance.” Expeditions with MCU Press, with Cadet Josh Williamson (under review

“The Bleak Prospects of Army Reconstruction in Somalia.” RUSI Journal, with Colin Robinson (Under Review)

“American Security Cooperation in the Periphery: The Divergence of the Philippines and Colombia.” Strategic Studies Quarterly, with Ian Bertram and Jesse Humpal (in-progress)

“The Paradox of Security Force Assistance after the rise and fall of the Islamic State in Syria-Iraq.” Special Operations Forces Journal, with Mike Fowler (under Review)

“A Path to American Hegemony in the 21st Century: Letting China and Russia Drain Themselves.” Parameters, with Ryan Burke and Wilson VornDick (in-progress)

“What does Military Assistance look like in the Middle East?” The Royal Military Academy (Koninklijke Militaire Academie), Breda, Netherlands, 17 February 2020

“Security Force Assistance as the New and Preferred Alternative Form of War in the 21st Century.” The Changing Character of War Centre Conference, ‘The Conduct of War: Past, Present And Future’, The University of Oxford, Oxford, England, 26-28 June 2019.

“The Ebb and Flow of the Casamance Conflict in Senegal: The Militarization that never was.” Preliminary workshop program ‘Security Threats, Militarization and the Democratic Accountability of the Use of Military Force’, German Institute of Global Area Studies (GIGA), Hamburg, Germany, 9-10 April 2019.

“New Formations for US Policy in the Sahel? The Obama Years and Trump’s Agenda.” Post-Intervention Governance and Security in the African Sahel Conference, Northwestern University, Evanston, IL, co-presented with Will Reno, 19 May 2017.

• Journal of Defense Analytics and Logistics