Department of English and Fine Arts 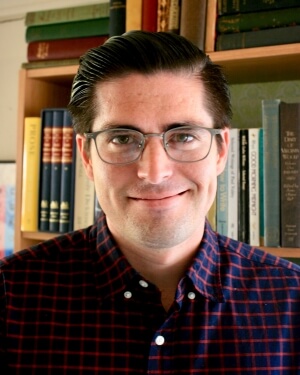 Daniel Couch is Assistant Professor of English at the U.S. Air Force Academy. From 2016-17 he was a postdoctoral visiting scholar at the American Academy of Arts & Sciences, and from 2015-16 he was a dissertation fellow at the McNeil Center for Early American Studies at the University of Pennsylvania.

He is currently at work on his book manuscript, American Fragments: The Political Aesthetic of Literary Ruins in the Early Republic. This manuscript examines the history of literary fragments in colonial and early national United States from the 1750s to the 1820s. The project assembles an archive of unstudied literary fragments, and presents a case for their significance in political and aesthetic traditions. In the late eighteenth century authors used the material form of a “fragment” of paper to represent marginalized individuals as varied as slaves, prostitutes, and beggars. At the same time, the prevalence of the fragment form reveals an underlying American interest in partial works, an aesthetics that contests the primacy of closed genres like the novel. Portions of this project have appeared in Early American Literature and The Eighteenth Century: Theory and Interpretation. He has also started drafting a second book manuscript that examines the history of erasure and deletion in American literature, portions of which have been published in Early American Studies and Arizona Quarterly: A Journal of American Literature, Culture, and Theory.

Eighteenth- and nineteenth-century America, the history of the book, the history of aesthetics, theories of form and formalism, political philosophy in the early republic, transatlantic studies