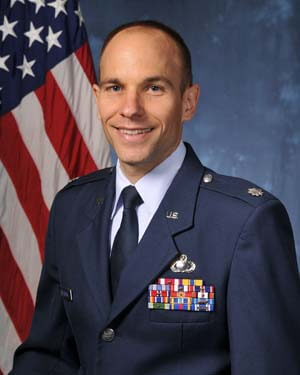 Lt Col Mike Anderson is the Deputy Department Head of the Department of Engineering Mechanics, and an Associate Professor of Engineering Mechanics, US Air Force Academy. Lt Col Anderson earned his PhD in Aeronautical Engineering from the Air Force Institute of Technology in 2011 where he performed pioneering research in the design and control of flapping wing Micro Air Vehicles (MAVs). From 2011-2014 he served in the Air Force Research Laboratory's Munitions Directorate (AFRL/RW) where he led research in GPS-denied navigation for multi-agent autonomous systems. Earlier in his career, Lt Col Anderson served as an F-16 flight control actuation systems engineer at Hill Air Force Base, Utah.

Lt Col Anderson is a registered Professional Engineer and an Associate Fellow of the American Institute for Aeronautics and Astronautics, where he serves on their Unmanned Systems Integration Committee. His research at the Academy focuses on terrestrial and aerial robotics, innovative design methodologies, engineering pedagogy, sports science and sports technology. He has been researching autonomous systems for over a decade, authoring several papers relevant to the field including design of terrestrial and aerial robots, energy efficiency and perching for small UAS, and flight control of Micro Air Vehicles (MAV).

Lt Col Anderson has served as a member of the USAFA Faculty from January of 2005 to August of 2008, being promoted to Assistant Professor in 2007. He rejoined the Faculty in May of 2014, where he continues to serve. He was promoted to Associate Professor in the Spring of 2016. He has taught the following courses: