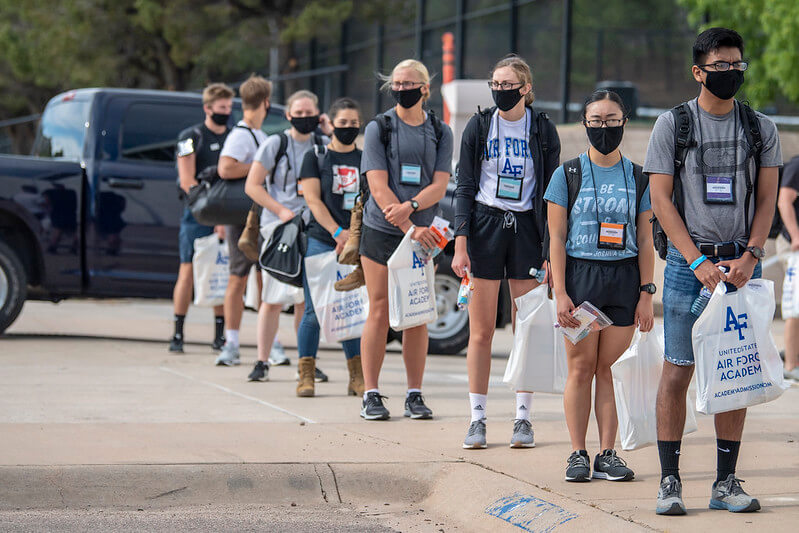 According to a report released by the Admissions Office at the Air Force Academy July 9, 1,145 cadets arrived at the school to begin Basic Cadet Training.

Successfully completing BCT’s six weeks of mental and physical training is among the first steps new cadets take toward earning a commission as an Air or Space force officer.

— 730 cadets are non-minorities; 134 are Asian; 103 are African American; 26 are Pacific Islanders; 10 are Native American; and 12 are unknown. One-Hundred forty-two are Hispanic.

— Seven men and nine women are the children of U.S. Military Academy graduates

— Seven men and two women are the children of U.S. Naval Academy graduates

— 181 cadets are first-generation college students; 134 cadets are from single parents homes, and 61 cadets are prior enlisted service members

While the global COVID-19 pandemic has presented challenges to the Academy, there were strict plans to protect the basic trainees and the school’s staff and families.

“We are dedicated to keeping everyone safe and healthy but need your help,” said Lt. Gen. Jay Silveria, the Academy’s superintendent, while speaking to new trainees, June 25. “Follow our health and safety guidelines, wear your masks and social distance whenever possible.”

Each trainee was tested for the coronavirus, quarantined and will be monitored for two weeks, among other precautions.