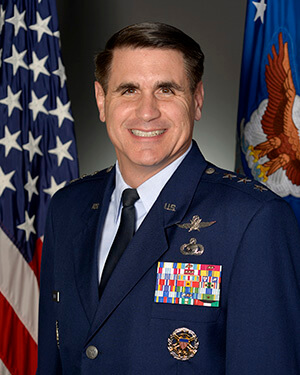 Lt. Gen. Shwedo has commanded at the detachment, squadron, group, wing and numbered air force levels. During these commands, his units were engaged in direct support to Iraqi Freedom, Enduring Freedom and the greater Global War on Terror providing worldwide Intelligence, Surveillance, Reconnaissance and Cyber operations. He also led an Intelligence Team to Desert Shield/Storm. His last command was 25th Air Force at Joint Base San Antonio-Lackland, Texas, where he led 30,000 personnel in worldwide operations, delivering multisource ISR products, applications, capabilities and resources. When he was the Chief, Information Dominance and Chief Information Officer for the Office of the Secretary of the Air Force, he led four directorates that supported 77,000 personnel and cyber operations across the globe with a portfolio valued at $17 billion.

Lt. Gen. Shwedo graduated from the U.S. Air Force Academy in 1987 with a degree in Military History and was also a student athlete, lettering in football.

Chief of Information Dominance and Chief Information Officer, Office of the Secretary of the Air Force, the Pentagon, Arlington, Va. (June 2017–June 2018)