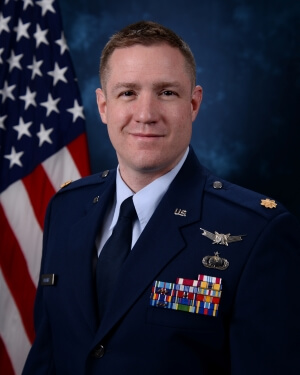 Major Lachlan Belcher is an Assistant Professor in the Department of Physics, U.S. Air Force Academy, Colorado Springs, Colorado. He entered the Air Force in 2003 as a graduate of the U.S. Air Force Academy, then subsequently earned his Masters in Applied Physics from AFIT in 2005.  After serving as the program manager for ICBM survivability at Hill AFB, Maj Belcher went on to earn his PhD in Applied Physics. Maj Belcher has served as a Division Chief and Branch Chief at the National Reconnaissance Office, Lead Test Director and Deputy Chief at The Starfire Optical Range, Air Force Research Laboratory, Kirtland Air Force Base, NM, and a Detachment Commander with the 474th AEF.