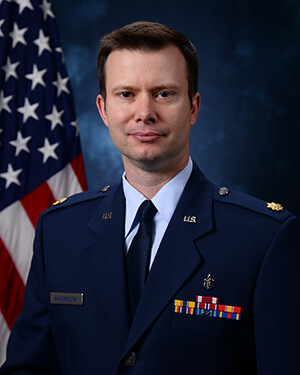 Major Adam Batchellor is an Assistant Professor at the U.S. Air Force Academy. Maj Batchellor has taught both core chemistry courses and was previously the course director for environmental and weapons chemistry. Maj Batchellor currently oversees the chemistry budget and laboratory operations, ensuring that over 130 labs and $7M in equipment are ready for use by 1000 cadets annually.

Maj Batchellor was commissioned as a Bioenvironmental Engineer (BEE) in 2004 and entered active duty through officer training school. Following an initial assignment as a BEE at Hill AFB, Maj Batchellor pursued a MS in Chemical Engineering through the Chemistry Department’s Faculty Pipeline program. After a two-year teaching tour at USAFA, which included a summer spent as a Visiting Scientist at the Defense Forensic Science Center, Maj Batchellor earned his PhD in Materials Chemistry. Following his PhD, Maj Batchellor served as the flight commander of Bioenvironmental Engineering and Public Health at Maxwell AFB where he led the installation’s preventive medicine and health promotion operations.