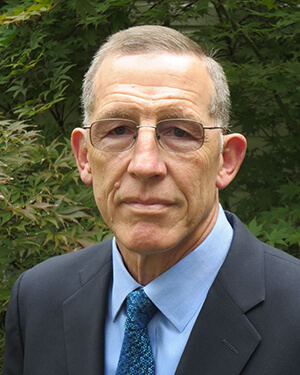 Dr. Randolph graduated from the U.S. Air Force Academy in 1974, recognized as a Distinguished Graduate and as the Outstanding Cadet in Humanities in his graduating class. The following year he earned a Master of Arts in the History of Science at the Johns Hopkins University, then entered pilot training. After completing pilot training he served three tours in the F-4 and F-15, then was assigned to the Pentagon on the Air Staff from 1985-1989. He returned to fighter operations in 1989 at Bitburg AB, Germany. From there he deployed in support of Operation Desert Storm while in command of the 22nd Fighter Squadron.

He attended the Air War College in 1992-1993, then returned to the Pentagon in the European Division, Joint Staff Directorate of Strategic Planning. While there he served as senior staff advisor on the issues of NATO enlargement, the Partnership for Peace, and the ongoing conflict in the former Yugoslavia. Secretary of the Air Force Dr. Sheila Widnall selected Dr. Randolph to direct her staff group in 1995, and he served in that capacity for two years. In 1997 he was assigned to the National Defense University as the Air Force Chair and Professor of Military Strategy.

Dr. Randolph retired in 2001, transitioning to a civilian faculty position at the Industrial College of the Armed Forces (ICAF), National Defense University. Upon earning his doctorate from the George Washington University in 2005, he was selected as department chairman, first for the Department of Grand Strategy, and then for the Department of Military Strategy. During that time he completed his history of the end game of the U.S. war in Vietnam. His book, Powerful and Brutal Weapons: Nixon, Kissinger, and the Easter Offensive, was published by Harvard University Press in 2007. He subsequently served as the Associate Dean of Faculty at ICAF, responsible for strategic planning, accreditation, and curriculum development.

Dr. Randolph transitioned to the Department of State in October 2011, serving first as the General Editor of the Foreign Relations of the United States series. In April of 2012 he was appointed The Historian of the U.S. Department of State and a member of the Senior Executive Service. Dr. Randolph led the Office of the Historian to a level of productivity unmatched in the history of the office. He retired from the Department of State in December 2017. In recognition of his leadership of the Office of the Historian, the Society for History in the Federal Government selected Dr. Randolph as the recipient of the Society’s highest annual award, the Roger R. Trask Award, as the federal historian whose work best “reflects the unique importance of federal history and the mission of the Society.”

In July of 2018 Dr. Randolph accepted the position of the Rokke-Fox Chair at the U.S. Air Force Academy's Center for Character and Leadership Development. In that role he serves as a senior advisor to the leadership of the Air Force Academy and CCLD on issues of honor and leadership, as a scholar of the history of air power and the profession of arms, and as a teacher.