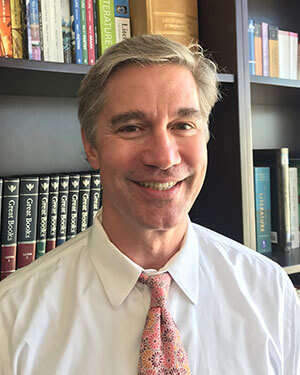 During the 2018-19 Academic Year, Professor Abshire will be serving as Distinguished Visiting Professor of English and Fine Arts. When not visiting, Abshire teaches English at Johnson & Wales University in Denver, where he has also served as the Chair of the College of Arts & Sciences and the director of the Honors Program.

At J&W University he teaches a range of interdisciplinary courses in American literature, film, and music as well as first-year writing courses. At the U.S. Air Force Academy he’ll teach ENG111 and ENG 211.

Abshire grew up in a small town in Southeast Texas; and like all good Texans, he’s very happy to be in Colorado where he lives with his wife, children, and dogs.

Abshire studies American Culture of the 20th and 21st Centuries. His work brings together the study of literature, film, and music. And from his earlier work on Depression-era westerns to his current work on country music, he has maintained a consistent interest in the construction of class and the ways various cultural forms are deployed to maintain or trouble class lines. His book project is tentatively titled On Starting a Damn Country Band: Alternative Country Music and Class in America. And he’s working to get an article out this year on music in the Coen Brothers’ film, Inside Llewyn Davis.

“Notes toward a History of Late-Twentieth-Century Masculinity in a Southeast Texas Refinery Town,” Flashquake 9.3 (Spring 2010)