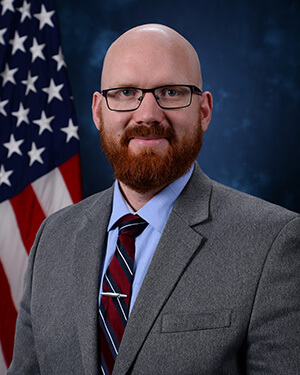 Dr. Ryan P Cress is the Director of Nuclear Science and an Assistant Professor of Physics, U.S. Air Force Academy, Colorado Springs, Colorado. He teaches in the Department of Physics and leads the Nuclear Weapons and Strategy Minor and Nuclear Research Program run through the Department of Physics. He also serves as the Academy’s Radiation Safety Officer. Through the Nuclear Program, Dr. Cress has focused on the development of three new physics courses with a nuclear weapons focus. He works with DTRA, AFNWC, AFTAC, and NNSA to create robust nuclear research opportunities for cadets at the Air Force Academy.

Dr. Cress Began his Civilian service after completing his PhD from Lehigh University in 2013 based on the work “Modeling the Structure of Disordered Binary Alloys and their Transformation Under Thermal Forcing”. He has a wife Melanie and a son Isaac as well as two dogs. When not at work he enjoys hiking, biking, skiing and Philadelphia sports.

Dean of Faculty, Department of Physics, Civilian of the quarter (2017)