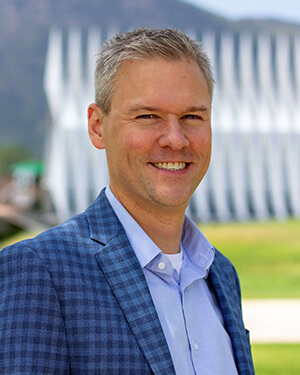 Professor McKechnie is an award winning teacher and scholar who focuses on constitutional law and theory. He has appeared in local, national, and international media outlets discussing legal issues in the news. His scholarship, which explores the intersection between civil liberties and technology, has been featured in USA Today and cited in federal district and appellate court decisions.

Before joining the faculty at the U.S. Air Force Academy, Professor McKechnie taught First Amendment law and Civil Procedure at the Appalachian School of Law. Prior to beginning his academic career, Professor McKechnie practiced law in Pittsburgh, Pa, where he primarily litigated labor law and free speech issues.

Professor McKechnie focuses his scholarship on the intersection between constitutional rights and technology. His scholarship explores the impacts of the Internet and social media on presidential power and civil liberties in the United States.

Anonymity and Anonymizers, in PRIVACY RIGHTS IN THE DIGITAL AGE (Christopher Anglim ed. 2016)

Facebook is Off-Limits? Criminalizing Bidirectional Communication via the Internet is Prior Restraint 2.0, 46 Ind. L. Rev. 643 (2013)

The Death of the Public Figure Doctrine: How the Internet and the Westboro Baptist Church Spawned a Killer, 64 Hastings L.J. 469 (2013)