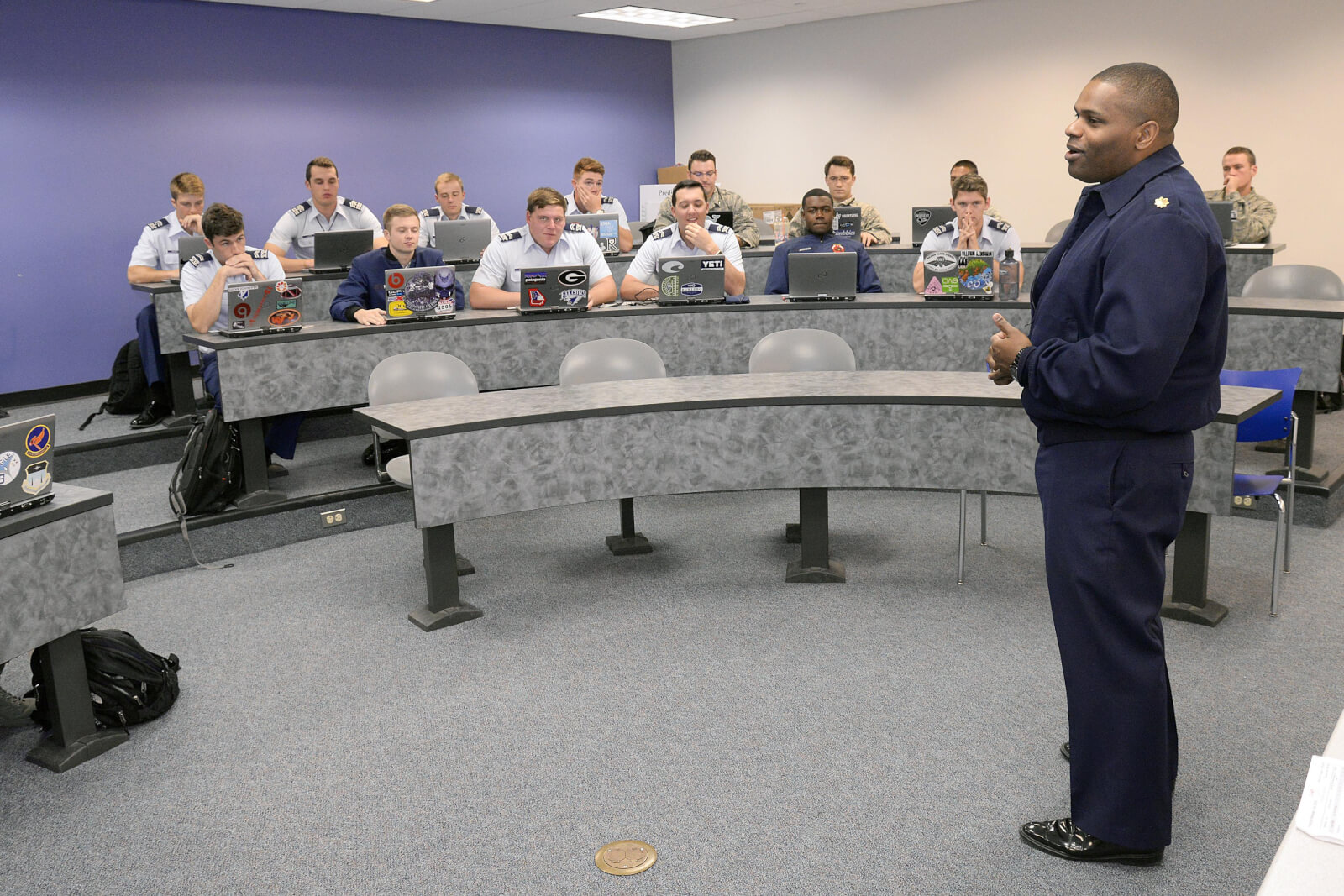 A young man from Jamaica beat the odds to become an Air Force officer and an advocate for youth in Colorado Springs.

Prosper is an assistant professor in the Academy’s Management Department. He keeps a busy schedule balancing his duties as an educator with improving the lives of children and at-risk young adults in Colorado Springs.

He said the Academy’s volunteer programs and community outreach solidify the link between the school and the City of Colorado Springs.

“[The Academy] is not isolated up ‘on the hill,’” Prosper said. “We don’t want to be separate from the community. We care about the community and the diversity of our population adds significantly to it.”

At the Academy, he helped coordinate the Science, Technology, Engineering and Mathematics Panel’s 2015 African-American Youth Leadership Conference, and regularly takes part in other diversity events, including the annual Tuskegee Airmen celebration. He said volunteerism can make a big difference in the lives of any cadet or Airman.

“It makes a huge difference when you help others simply because you want to, for no personal gain,” Prosper said. “It’s a great habit to develop early, and makes our lives more enjoyable and fulfilling.”

Col. Troy Harting, head of the Management Department, said Prosper is a role model for cadets.

“He really does epitomize service before self,” he said. “He contributes amazing amounts of time to his cadets, whether in class or volunteering with the Women’s Soccer team or a cadet squadron, yet still has the energy to be a pillar of the community.

“He’s got a great sense of natural curiosity and a desire to help others that’s unequaled in my experience,” Harting said.

“Who just goes and starts a scholarship fund? Well, he does,” Harting said.

When it comes to his off-duty volunteer work, Prosper’s goal is to make sure every child he meets is aware of the opportunities he took advantage of to better his life.

‘Not supposed to amount to much’

Prosper is 36. He was born in Kingston, Jamaica, and raised in poverty by his single father. The family’s small home was regularly preyed upon by robbers.

“[There was a] high crime rate in Kingston swirling around my family,” he said. “Most times, homeowners were killed if they discovered the robbers.”

Prosper and his brothers, Desmond and Rohan, went to live in Farmingdale, New York, with their single mother before his 10th birthday, but life wasn’t easier there for the “kid with the funny Jamaican accent,” he said.

“When we arrived at JFK Airport in New York, we had no luggage to collect,” he said, “Desmond carried only $100.”

“There was crime and a mindset that people who looked like me, lived where we lived, and were from where I was from, were not supposed to amount to much,” he said. “Many people I knew and associated with actually started to believe it.”

Adding to the struggles, the faculty at Saltzman East Memorial Elementary School insisted, without explanation, he repeat the third grade. At least until his mother intervened.

“My mom refused because they could not tell her why,” Prosper said.  “So I was tested, Aced the test and allowed to stay on track with the fourth grade. That was my wake-up call that life in the U.S. was not going to be easy.”

Another challenge was avoiding drugs.

“Most of my friends [took] or sold drugs, and it was a struggle not to succumb to their way of life,”

Prosper said. “There were fights and suspensions from school and I struggled academically. My high school [faculty] simply wanted me to meet the graduation requirements, which did not require much effort.”

As a last straw, Prosper’s mother enrolled him in Fork Union Military Academy, an all-male boarding school in Virginia. He was introduced to the military when he took a field trip to The Citadel. After graduation, he was accepted to The Citadel and assigned to ROTC Detachment 765. This, he said, is when his life changed for the better.

Prosper graduated from The Citadel in 2001 with his commission and began his active duty Air Force career at Tyndall Air Force Base, Florida. He arrived at the Academy in 2014, and fell into what he calls the Academy’s “vibrant cadet outreach program.” He was impressed with the level of care cadets showed for each other and their surrounding community.

“It’s not an incentive for cadets to volunteer — they just want to do it,” he said. “Once they start enjoying it, they follow up.”

Prosper hopes to remain at the Academy until he retires and live in Colorado Springs.

“I don’t want to be known as the officer who moves into the neighborhood and three years later, they see a moving truck,” he said.

“Colorado Springs is a progressive, active community, with successful people wanting to share their knowledge,” he said.

Looking back, Prosper sees how the Air Force and community service have enriched his life.

“I’m a late bloomer who got lucky,” he said. “Without even knowing it back then, my life has been a struggle to break down barriers — and now it’s time for me to share what worked and what did not work for me to get to where I am today.”

Editor’s note: The Xi Pi Chapter has been selected receive the Outstanding Service Organization Award from the City of Colorado Springs in November.