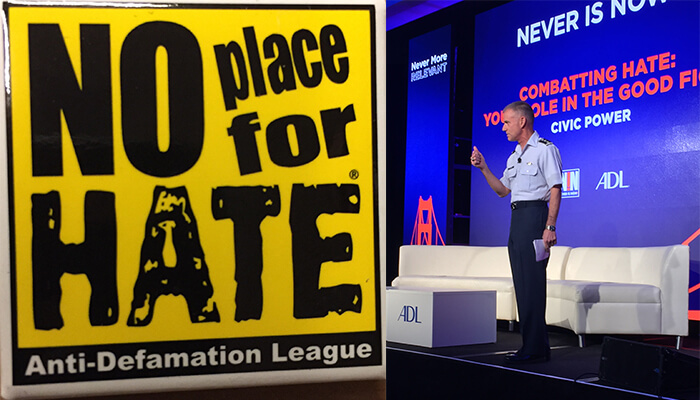 U. S. AIR FORCE ACADEMY, Colo. — The Air Force Academy was recognized by the Anti-Defamation League Nov. 13 at its Never is Now Summit for its stance against intolerance.

Scott Levin, director of the ADL’s Mountain States’ Region, applauded the Academy for combatting racism and bigotry, and for “swiftly, clearly and forcefully accessing the racial slurs at the Air Force Academy Preparatory School,” Levin said.

“I can only accept this award on behalf of the faculty, staff and the coaches of the U.S. Air Force Academy,” he said to an audience of educators, diversity experts and ADL officials. “They are the ones that everyday teach those values to the cadets. They are the ones who should be really recipients of the award for their teaching tolerance, character, leadership, and integrity.”

Yvonne Roland, the Academy’s director of Culture, Climate and Diversity, said the institution draws strength from diversity and inclusion.

“By embracing our differences we help create a culture of respect and dignity,” she said. “As an institution of higher education and a military installation, we strive to develop future leaders who can serve our diverse nation. We prepare our cadets to meet the challenges of an ever changing global environment and to value ethics and human dignity.”

Silveria also told the audience that Academy graduates carry the legacy and power of diversity through their careers.

“They have to carry on that legacy as lieutenants and as they serve the United States,” he said.