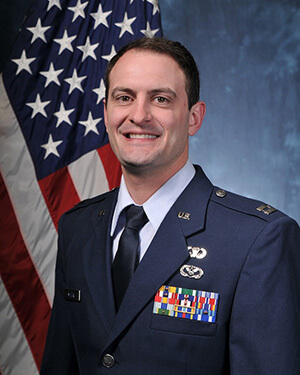 Capt Miller was commissioned in 2009 as a graduate of the U.S. Air Force Academy in Colorado. He was then a graduate of the Civil Engineering Officer Technical School, and continued to his first duty station with the 60th Civil Engineering Squadron at Travis Air Force Base in California. As a Lieutenant he was briefly a Project Programmer before becoming the Officer in Charge of Service Contracts. In 2011 he was deployed to Afghanistan as the Detachment Officer in Charge and Lead Engineer of Regional Construction Team 8 at Camp Leatherneck. Following his deployment he served as the Chief of Asset Optimization as well as the Energy manager for all of Travis Air Force Base. Captain Miller was then selected to attend the Air Advisor Academy and subsequently joined the 571st Mobility Support Advisory Squadron in the 621st Contingency Response Wing. Here he advised South and Central American partner nations on matters concerning power infrastructure and renewable energy.