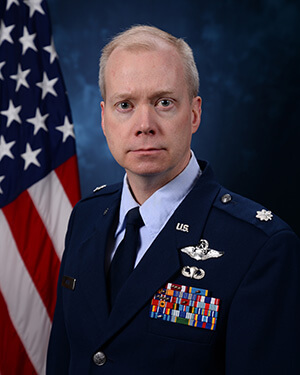 Lt Col David Meier was commissioned into the Air Force upon graduation from the U.S. Air Force Academy in 1996. He then completed Pilot Training at Columbus Air Force Base and Naval Air Station Corpus Christi. During his next two assignments, Lt Col Meier operated the C-130H for Air Mobility Command and Pacific Air Forces throughout Europe, Southwest Asia, Southeast Asia, South America, and Australia. While stationed in Alaska, he was one of a very small number of pilots qualified to operate in and out of the state’s Long-Range Remote Radar Sites. Following these operational assignments, Lt Col Meier brought this worldwide experience to the C-130 Schoolhouse, serving for four years as an instructor and evaluator pilot. While at the Schoolhouse, he served as the C-130E Chief Pilot for the Operations Group and the lead Functional Check Flight pilot for the base.

Lt Col Meier left the C-130 to pursue a master’s degree in physics at the Air Force Institute of Technology (AFIT) in 2008, with a follow-on assignment at the U.S. Air Force Academy as a physics instructor and glider instructor pilot. He completed the DARPA Service Chiefs’ Fellowship in Arlington, VA, researching small unmanned aerial system capabilities and potential countermeasures. After a second AFIT assignment, earning a Ph.D. in physics, he returned to the U.S. Air Force Academy in 2015. During this current assignment, he deployed for one year serving as the Chief of Safety for Al Dhafra Air Base, U.A.E. He returned from this deployment in 2018 to direct the Physics 110 course and continue flying as a T-53 instructor pilot.