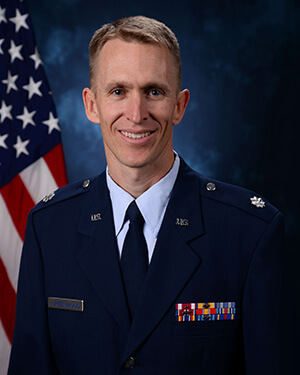 Lt Col Greenwood was born and raised on a small family farm in southeast Idaho. At the age of 17 he moved with his family to Utah where he graduated from American Fork High School in 1994. After graduation he attended Brigham Young University (BYU), taking a two-year leave of absence to serve as a missionary for The Church of Jesus Christ of Latter-Day Saints after his freshman year, and received his Bachelor of Science degree in Mechanical Engineering.

Lt Col Greenwood commissioned as an ROTC graduate in December 2000 and was assigned to Hanscom AFB, MA where he deployed to help set up the Air Operations Center at Al Udeid AB. After receiving his MS in Aeronautical Engineering from AFIT, Roger served as deputy in AFRL’s Combustion branch and as program manager of a small Unmanned Aerial System program. He then served three years as instructor, assistant professor, and executive officer in U.S. Air Force Academy's Department of Aeronautics. Lt Col Greenwood then attended Purdue University and published his dissertation entitled “Measurements of Entropy-Layer Instabilities over Cone-Ogive-Cylinders at Mach 6”. Before coming back to U.S. Air Force Academy where he currently directs the High Performance Computing Research Center, Roger spent three years leading the Advanced Missile Development branch at Los Angeles AFB, CA. Roger loves participating in outdoor activities and spending time with his wife Marci and their five children.